the fire was started by unknown people but coincided with the city’s seizure by militias belonging to the Syrian Defense Forces alliance, and incinerated official documents that proved individuals’ ownership of their property 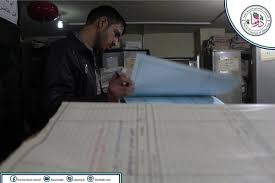 Activists in the city of Menbij said that a fire broke out in a government building in the city, resulting in the burning of all documents and records of real estate holdings pertaining to real estate in the Menbij and al-Bab areas, as well as their villages.

The sources quoted city residents as saying the fire was started by unknown people but coincided with the city’s seizure by militias belonging to the Syrian Defense Forces alliance, and incinerated official documents that proved individuals’ ownership of their property.

City residents expressed fear about area residents’ inability to prove ownership of their land and buildings if they return to the city, accusing the forces taking control of the city of intentionally burning the property records in preparation to seize civilians’ property.

In contrast, the spokesman in the name of the local council, Mohamed al-Khatib, said that the fire that broke out in the city court will not have a large effect on proving property ownership, even if it burned all of the records, because the local revolutionary council for the city of Menbij had prepared backup electronic copies of all records in 2012.

Khatib added that there were three electronic copies made of the real estate records of Menbij and its countryside (including Meskeneh, Sareen, and Ain al-Arab), with one of them sent to the general property register for the regime government in Damascus, and two other copies of the records being held by two people from Menbij.

Khatib also said it was likely that the ISIS group had moved the property records to another location while it was in control of the city for about two and a half years.

The TV station al-Khabar, which is close to the regime, quoted Mohamed Mayyel, the head of the property registration in Aleppo as saying that the real estate department had an electronic copy of all real estate records for all properties in the city of Menbij and a large proportion of properties in the al-Bab area.

It appears that electronic copies have been made of all real estate records in the Menbij and al-Bab areas since the start of the revolution in Syria, and are preserved in the real estate department in Aleppo city.