Convoys have not reached any of the humanitarian besieged areas during the past month, de Mistura announces 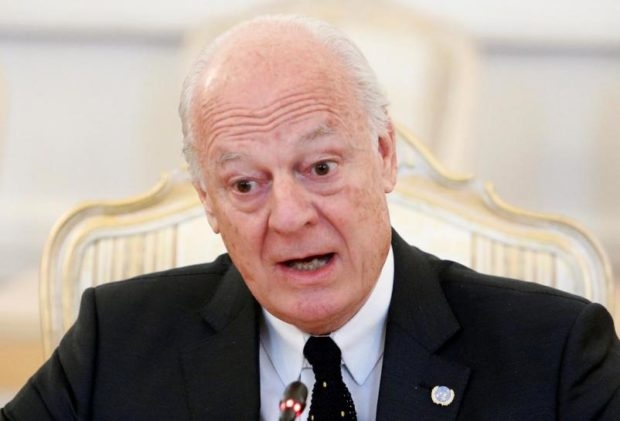 Humanitarian convoys have not reached this month besieged areas of Syria with civilians in dire need of food and medicine, U.N. peace envoy on Syria Staffan de Mistura said on Thursday.

“Not one single convoy in one month has reached any of the humanitarian besieged areas,” de Mistura told reporters, blaming relentless fighting.

In protest at the failure of warring parties to allow aid to reach civilians, de Mistura suspended the weekly meeting of the Geneva-based humanitarian taskforce after eight minutes “as a sign of deep unhappiness” with the failure to restore calm to enable aid deliveries to stricken civilians in besieged districts.

The peace envoy said a 48-hour pause in fighting in the northern city of Aleppo was the main objective of a meeting later in the day of major and regional powers tasked with reviving a collapsed cessation of hostilities accord.

“I again insist on behalf of the Secretary General of the U.N. and of all the Syrian people (on having) a 48-hour pause in Aleppo to start with,” he told reporters in Geneva.

“That would require some heavy lifting from not only the two co-chairs (Russia and the United States) but also those who have an influence on those who are fighting on the ground.”

Aleppo, Syria’s second city and former economic hub, has become the focus of fighting in Syria’s five-year-old civil war after it became split into rebel- and government controlled areas. Up to two million people on both sides lack access to clean water after infrastructure was damaged in bombing.

Escalating violence in what was Syria’s most populous pre-war city and biggest commercial hub has caused Geneva peace talks overseen by de Mistura to break down.

The Syrian opposition has said it wants to see a credible pause in violence there, as well as improved humanitarian aid access, before peace talks can resume.

Some 590,200 people are now living in besieged areas of Syria, according to U.N. figures.

Aid convoys have ground to a halt during the month of August, and the only supplies being delivered are by air drops to Deir-ez-Zor, the government-controlled city of 200,000 in the east under siege by ISIS, de Mistura said.

Four besieged areas — Madaya, Zabadani, Foah and Kafraya — have not been reached by a convoy in 110 days, the U.N. envoy added.

Friday will be the annual World Humanitarian Day, he noted.

“And in Syria what we are hearing and seeing is only fighting, offensives, counter-offensives, rockets, barrel bombs, mortars, hellfire cannons, napalm, chlorine, snipers, air strikes, suicide bombers,” he said, in reference to recent allegations of chemical weapons attacks.