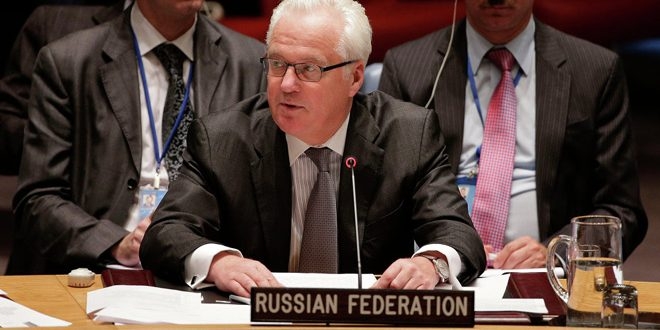 ISIS’ capacity to produce chemical weapons underscores the timeliness of Russia’s initiative to draft an international convention on the struggle against acts of chemical and biological terrorism, Russian envoy to the UN Vitaly Churkin said on Tuesday.

He added: “The availability of chemical weapons production facilities to the Islamic State and the risk of its proliferation around the whole region of the Middle East is a tangible argument illustrating the timeliness of the Russian initiative to draft an international convention in the struggle against acts of chemical and biological terrorism.”

“It is obvious that the classical understanding of notions like arms control, disarmament and non-proliferation have been eroded step-by-step … assuming a new counter-terrorism measurement,” the Russian envoy explained.

Churkin said Russia had suggested drafting a convention on the struggle against acts of chemical and biological terrorism at the UN Disarmament Conference in Geneva in March this year.