Gunmen set fire to a number of buildings including their headquarters before being transported to opposition-held Idleb city, reporter noted 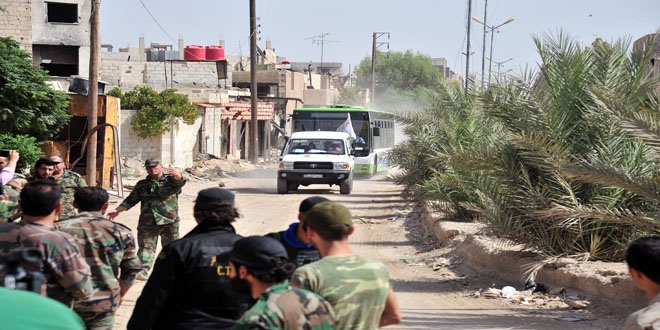 Government forces took complete control of Daraya city in western Ghouta after completing the evacuation of civilians and militants on Saturday.

Dozens of buses had entered the city earlier to evacuate more civilians and militants, while gunmen set fire to many of their headquarters and positions inside Daraya before their departure, a local reporter noted.

The buildings which were set ablaze contained computers and communication devices, proof that the gunmen had external affiliations, according to the reporter.

Those buses transporting families have already left the city towards the makeshift centers, while others transporting gunmen and their family members headed towards Idleb city.

Later, Governor of Damascus Countryside Alaa Ibrahim toured some neighborhoods in Daraya, telling reporters that engineering teams will be sent to the city to initiate reconstruction plans.

The governor noted that the evacuated families are being located to a makeshift center in al-Hirjalleh village in Kiswa, south of Damascus.

The center includes 724 housing spaces, 300 of which are already fully equipped and prepared, according to Ibrahim.