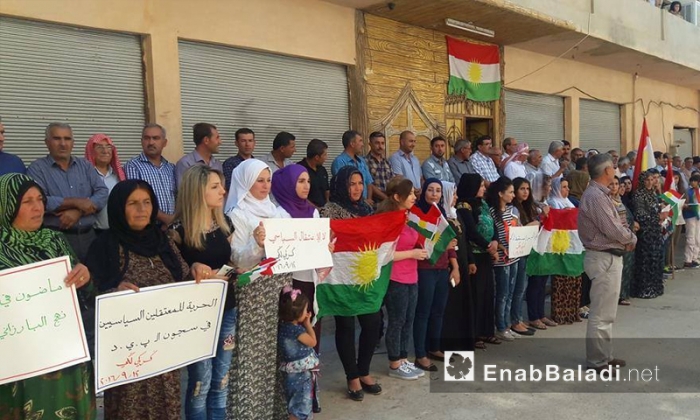 The local councils of the Kurdish National Council in the northern province of Hassakeh organized a sit-in against the practices of the Democratic Union Party (PYD).

Enab Baladi’s correspondent in Hassakeh reported on Monday, September 12, that the local councils in Maabdeh, Amoodeh, Qamishli, al-Jawadiyeh, and Malakiyeh carried out a sit-in demonstration criticizing the practices of the PYD and arbitrary arrests.

According to the correspondent, the participants demanded the release of political prisoners held by the party whose number has reached about 100. They raised banners demanding the party stop its practices and called for the immediate release of prisoners.

The Kurdish National Council said on its official site that its local councils organized the sit-in under the slogan “no political arrests.'

Hundreds of members of the Kurdish National Council in Syria demonstrated last Friday in the German city of Dortmund to criticize the PYD’s practices against Kurdish politicians in the Kurdish areas of Syria such as Qamishli, Malakiyeh and others.