Two people were injured in Damascus on Monday in terrorist rocket shells that hit al-Abasyeen area, Qasaa and Arnous neighborhoods 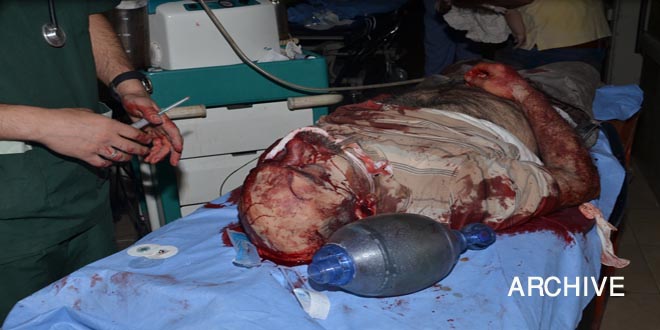 Twenty civilians were killed on Monday and 55 others were wounded in a terrorist explosion that targeted a hall for weddings in Hassakeh.

A police source said that a terrorist blew himself up with an explosive belt inside the al-Sanabel hall near Safyiah village on Hasaka-Qamishli highway.

The source said that the explosion killed 20 civilians and wounded 55 others.

Later, a police source in Aleppo told SANA that rocket shells, fired by terrorists from the eastern neighborhoods of the city targeted citizens’ houses in New Aleppo and Seif al-Dawleh, injuring five civilians.