Assad adviser says the efforts of Syria, Iran and Hezbollah against the West and Israel will help shape the future of the world 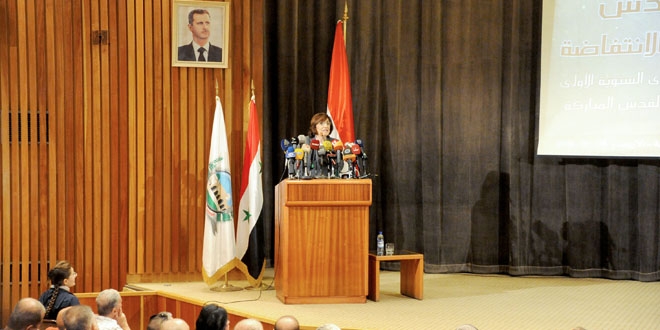 Bouthaina Shaaban, a top adviser to President Bashar al-Assad, stressed that the sacrifices of Iran and Lebanon’s Hezbollah have managed to foil the West’s plots in Syria, asserting that this “Axis of Resistance” will help define the shape of the future world.

In a speech at the forum “Al-Quds, the Pulse of Intifada” held on Wednesday, Shaaban said that the struggle should concentrate on resisting Israel’s occupation of Arab lands.

“The founding leader (former Syrian President) Hafez al-Assad didn’t need 23 years to say that the Oslo agreement has no value, that none of it will be implemented, and that it’s a disaster for the Arab nation; he said it directly after the agreement,” she said.