Social media pages announce most loyalist towns and villages in the coastal province have suffered a loss in the fighting, with even the smallest of villages mourning fighters killed in Aleppo 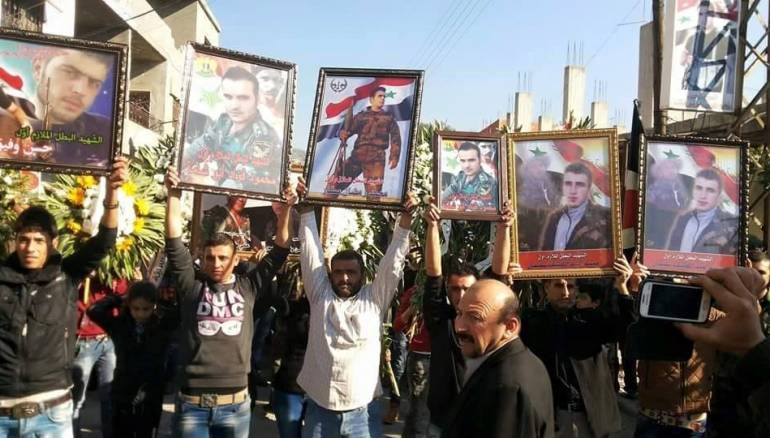 Despite an absence of accurate statistics about the number of regime forces from Syria’s coastal province who were killed in recent days in the battle for Aleppo, indications suggest the death toll has already entered into the dozens. Among those reported killed are high-ranking officers, government forces, as well as members of the loyalist NDF and Suqur al-Sahara militias.

By observing the Facebook pages of pro-regime media outlets, it appears that most loyalist towns and villages in the coastal province have suffered a loss in the fighting, with even the smallest of villages mourning fighters killed in Aleppo.

A page set up by locals from Beit Yashout counted the fall of eight of its residents who were killed in Aleppo, whose bodies arrived on Saturday to be taken to the village cemetery in a funeral procession.

The Bahlawaliyet area also mourned the death of three of its residents who were killed in the fighting in Aleppo on Friday. A funeral procession was also held for three fighters from Al-Daatour, a suburb of Lattakia city.

Media activist Mohammad al-Sahili indicated that a large number of bodies are still in hospital morgues in Tartous, Lattakia and Jableh.

Assad loyalists have accused Iranian and Iraqi militias of betraying regime forces and leaving them to fight alone, while others claim army officers are selling weapons to rebels and surrendering regime positions without a fight.

Pro-regime media outlets accused Russia of treachery and described, “its halt of bombing the terrorists,” as collusion with the universal conspiracy against the Syrian regime, but it confirmed that President Bashar al-Assad “will prevail even if he must fight alone.”