Markets strike to 'save the eastern Ghouta' and correct the direction and path of the revolution, activist reports 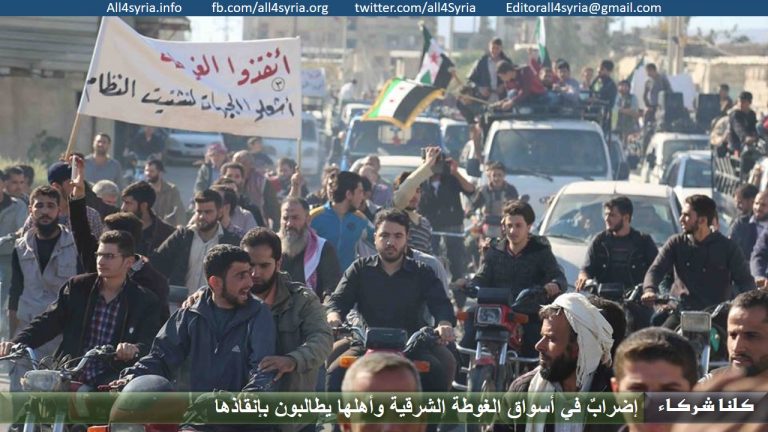 The markets of the eastern Ghouta in the Damascus countryside went on strike Wednesday, November 2, with thousands of residents coming out in fierce protest under the banner, “Save the Ghouta,” in which they made four demands for revolutionary and popular mobilization.

The activist Youssef al-Bustani in a post on Facebook said that the markets had gone on strike for the sake of the eastern Ghouta and to rescue it from danger. He added: “They responded to the revolutionary mobilization and joined us today with a friendly position. The people of the Ghouta are the ones who will correct the direction and path of the revolution and we are counting on them today.”

The protesters demanded the construction of an operations room, eliminating checkpoints between the Ghouta’s cities and towns, opening the quiet fronts, and returning rights to their owners.

Bustani said that demonstrators also demanded the trial of masked militants and those who commanded them in Faylaq al-Rahman to shoot at protesters.

He said that Jaish al-Islam (Army of Islam) group agreed to the protesters' demands in a decision sealed by the commander and Jaish al-Fustat operations room had agreed verbally to the demands, while Faylaq al-Rahman had not agreed to the four conditions.