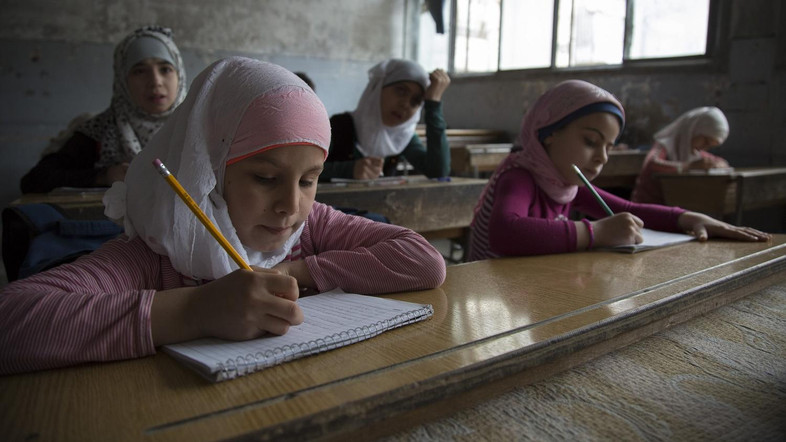 In its first sessions midway through this year, Syrian parliament discussed the issue of substituting religious education in the schools with ethics courses, preventing the separation of students by religion during their education in schools. Several presentations by secular lawmakers, most of them Syrian nationalists and independents, stressed the need to change the schools and curriculums through a draft resolution to substitute religious education with ethics courses. Other lawmakers rejected the draft resolution, prominently the two MPs Farah Hamshou and Reem al-Saie, which resulted in the fabrication of calls by Hamshou to separate males and females in the schools.

Despite the campaign achieving a discussion as part of the draft resolution presented to parliament, it does not seem the resolution will be implemented soon. The journalist Maghie Khozam, one of the founders of the campaign, told Al-Akhbar that she was not satisfied with only raising the issue in parliament, as the founders did not hope to present the campaign for superficial discussion, without any agenda or studies aiming to deepen knowledge of morals and humanitarian principles in the minds of children.

Khozam continued that: “Humanitarianism is one of the most important ethics. It is a lifestyle which begins with the decision of the state to circulate it, by banning dealing in religious affairs in the schools under the penalty of fines, in addition to taking an interest in psychological support in the schools through weekly sessions for children.”

About the hope for her demands and the possibility of implementing them in the current circumstances, she said: “We need to plant the right seeds. Whether officials are able to take these decisions or not, that is their business.”

Khozam added that: “The aim is not to make students adhere to new texts built on memorization and indoctrination to be discarded once the school year is out. What is the use of books like this dealing with humanitarianism and ethics in the bag of a student whose body is blue from the beatings and violence of his family?”

Some see it as an idealistic proposal not commensurate with the situation of the country and the chaos of the current war. Nabil Salah described it after it was discussed in parliament as mere “cafe chatter,” as the participating MPs put forward the proposal and one of the most prominent people calling for it believes that state has been allied with religious institutions, since the start of the Baath revolution, which stopped at the doors of the Directorate of Religious Endowments rather than daring to enter and restructure it.

He noted that “The Baathists meet with the Islamists on several issues, in light of their emphasis on the dialectic of Arabism and Islam.” The Syrian MP said that: “The Baathist bloc in parliament will not agree to changing the religious educational curriculum which is being studied by students.”

He added his proposal to study the other religions and ideologies practiced by Syrians within the religious education curriculum, on the grounds that, “Some people need to know about the religions of others, in order to teach them to stay away from racist stories which each religion’s members have against the other,” as he put it. Salah’s view accords with the opinion of the founders of the campaign to substitute religious education in that “Ethics are achieved through teaching in the schools and the home together. This is bigger than being a theoretical proposal.”

Salah promised to propose “a new idea during the current parliamentary sessions which could satisfy both enlightened Islamists and secularists regarding teaching the history of religion and showing the fruits of it in the culture of the new Syrian generation, which has been stung by the fire of the Salafis.”