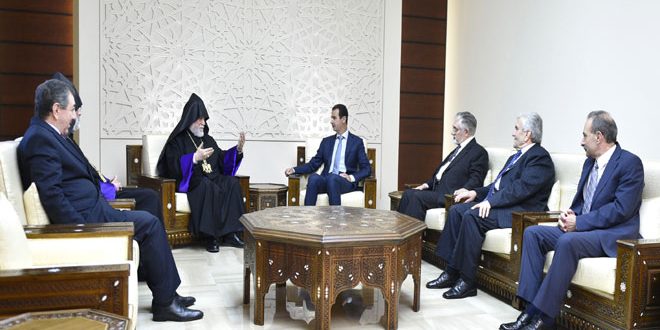 President Bashar al-Assad received on Wednesday the head of the Armenian Apostolic Church, Aram I Keshishian, and an accompanying delegation.

During the meeting, Aram I congratulated the president and the Syrian people on the liberation of Aleppo city after years of suffering from crimes committed by terrorists.

The Catholicos voiced his sincerest hopes and prayers for the liberation of the whole of Syria from terrorism so that peace and security would prevail as soon as possible.

For his part, President Assad affirmed that the years-long terrorist war targeting Syria had failed in achieving one of its most dangerous goals, that of undermining the Syrian people’s unity and harmony. Assad added that the war has instead made Syrians more committed to their identity and civilization which is based on diversity and plurality.