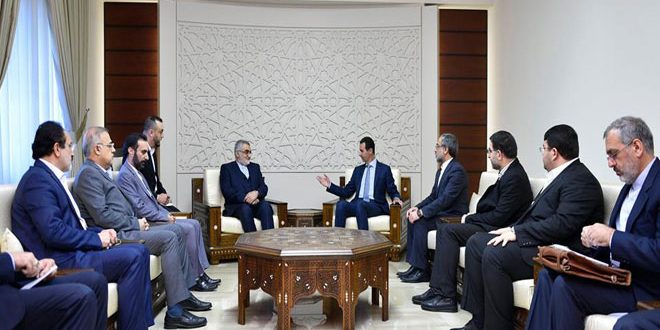 President Bashar al-Assad received on Wednesday the head of the Iranian parliament’s National Security and Foreign Policy Commission, Alaeddin Boroujerdi, for talks on bolstering relations and coordination between Syria and Iran.

President Assad stressed that Iran is partner to the achievements being made against terrorists in Syria, voicing his appreciation for Tehran’s political and economic support which contributed greatly to bolstering the Syrians’ steadfastness.

For his part, Boroujerdi congratulated the Syrian people over the victory on the battleground in Aleppo, saying that the win is an important step towards restoring security and stability to the entirety of Syria.

He affirmed that Iran always has and always will stand alongside Syria in confronting the terrorist war, as the country’s future is very important for the stability of the region.

In a statement to journalists after the meeting, Boroujerdi reiterated Iran’s support for Syrian-Syrian dialogue to reach a political solution for the crisis, stressing that Syria’s fate must be decided by the Syrian people, and that any decision made outside Syria and that is rejected by Syrians will not succeed.