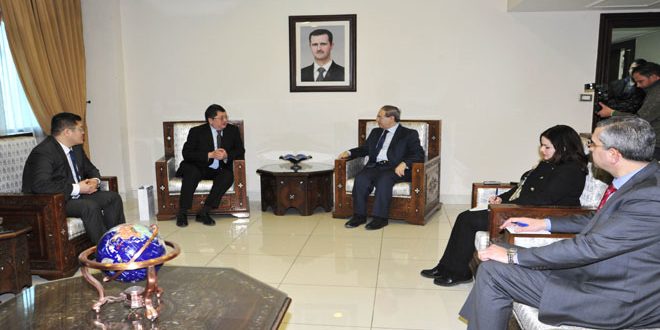 Mikdad expressed hope that the upcoming Syrian-Syrian meetings in Kazakhstan’s capital Astana would produce results that lead to eliminating terrorism and holding its backers to account.

The foreign minister said the Syrian government agreed to attend the talks which, he said, should take place without foreign interference, adding that Syria is serious about leading the talks to the hoped-for result of ending terrorism.

“We are interested in making these talks a success, and we hope to reach the expected results,” he said, noting that a delegation was being prepared ahead of the event.

Ambassador Berdibay noted that the talks aim to provide the suitable opportunity for participants to reach agreements that would help the Syrians in stopping bloodshed and solving the crisis through peaceful means.

During the meeting, Mikdad also expressed Syria’s gratitude toward Kazakhstan, currently a nonpermanent member of the UN Security Council, for the humanitarian aid it delivered to the port city of Tartous on Thursday.