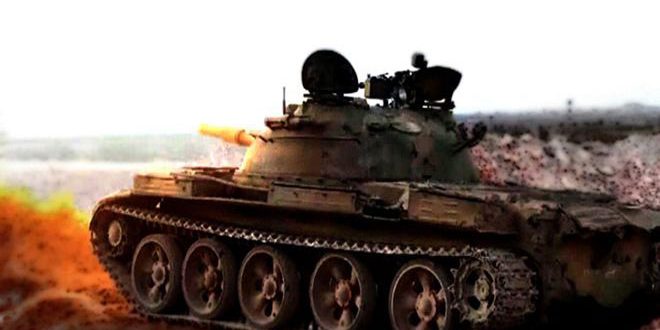 Syrian army units in eastern Homs broadened their control in the T4 region after killing the last gathering of Islamic State terrorists in the area.

SANA’s reporter in Homs said that Syrian government forces, backed by artillery and warplanes, liberated the areas of the Abu Tawala well and Boyout Jarbou al-Izzo after clashing with the terrorists on Monday.

The reporter pointed out that the area was later cleansed of mines and other improvised explosive devices following the operations.

He added that an army unit also retook a number of strategic hills overlooking a nearby oil pumping station.

Meanwhile, government and allied forces also conducted operations against ISIS terrorists in Maqaber on the southern outskirts of Deir-ez-Zor city, successfully seizing control of several areas, according to a SANA reporter in the area.

Large amounts of armed vehicles were also destroyed during fighting in the Panorama area southwest of the city.

The reporter pointed out that army forces also destroyed two armed drones and heavy artillery in the area surrounding the Tharda mountain south of the city.