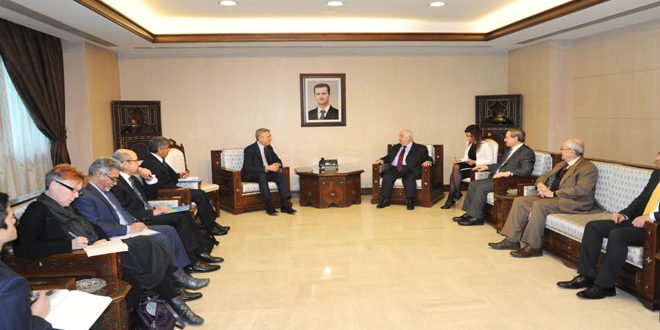 Muallem briefed Grandi on the huge efforts exerted by the Syrian government to improve the living conditions of its citizens and displaced persons, highlighting the importance of the reconciliation and reconstruction processes following the effects of terrorism on infrastructure and homes.

The minister thanked the UNHCR for its work with the Syrian government to provide aid and meet humanitarian needs, but stressed the necessity to depoliticize the delivery of aid.

Muallem also reiterated the government’s call for Syrian refugees based in neighboring countries to return to their homeland, affirming the government’s readiness to receive them and provide for them.

In turn, Grandi thanked the Syrian government for its efforts in providing humanitarian aid, affirming the UNHCR’s desire to strengthen and expand existing cooperation with the government.

In response to recent talk about creating safe zones in Syria, both sides said that any attempt to implement such a plan without coordination with the Syrian government would be unsafe and would constitute a violation of Syrian sovereignty.