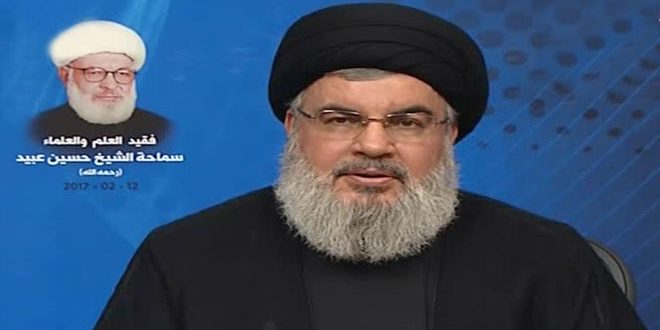 Hezbollah Secretary General Hasan Nasrallah affirmed on Sunday that the Lebanese group supports every effort which aims at preventing bloodshed and paving the way for reconciliation and political solutions in Syria.

In a speech during a memorial ceremony in Lebanon’s Baalbek, Nasrallah refuted the media’s claims that Hezbollah is violating the ceasefire in Syria, claiming the reports are part of campaign of false allegations, lies, and slander by terrorism-sponsoring states and deceptive outlets.

The Secretary General stressed that Hezbollah strongly supports the ceasefire, adding that it supports every measure which could lead to national reconciliation and political solutions while preventing further bloodshed.

He pointed out that accusations about implementing demographic changes in Syria only seek to incite sectarianism.

Nasrallah said that Hezbollah is keen to address humanitarian crises in Syria, particularly in the terrorist-besieged towns of Kefraya and Foua in Idleb province. He also called for dealing with this issue of displaced Syrians living in Lebanon in a moral and humane manner, removed from politics and exploitation.