Turkey's numerous transgressions, as well as the late arrival of its delegation to the meetings, proves its lack of seriousness and "clear will" to hinder dialogue, state media quotes Syrian government envoy as saying 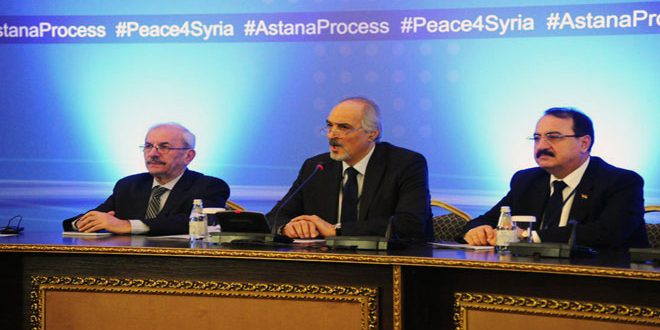 Head of the Syrian government delegation to Geneva Bashar al-Jaafari said he believes the current Astana consultations have a “noble” aim in achieving a lasting ceasefire and the separation of armed groups from terrorists.

In a press conference following the plenary, Jaafari said the second Astana meeting has paved the way for the upcoming Geneva conference, noting that meetings with the Russian and Iranian sides were “fruitful.”

He affirmed that Syria is committed to the ceasefire agreement in an effort to end the Syrian bloodshed, stressing however that Syria “maintains the right to respond to any breach of these arrangements by the armed terrorist groups.”

The envoy warned that those who breach these arrangements will be considered terrorist targets and will be combated by the Syrian army and its allies.

Jaafari dismissed the late arrival of the Turkish and armed groups delegations to the meetings as a proof of their lack of seriousness and their “clear will” to hinder and foil Astana meeting.

He pointed out that Turkey has failed to commit to controlling its southern border and has instead facilitated the entry of tens of thousands of terrorists into Syria, stressing that decisive measures should be taken to close the Turkish border.

“Turkey can’t play both roles of causing a fire and fighting it at the same time,” he said, affirming that Turkey must withdraw its forces from Syria and respect its sovereignty and territorial integrity.

Speaking during the session, both Russian and Iranian delegates voiced their commitment to helping solve the six-year crisis.

“We call on all countries to determine their role regarding the future of Syria and its people who have suffered a lot throughout this crisis,” head of the Iranian delegation Hossein Jaberi Ansari said.