The Syrian regime forces scored a major gain against ISIS militants in the eastern countryside of Aleppo, while the negotiations at Geneva continue as Russia and US talk of plans for establishment of safe zones 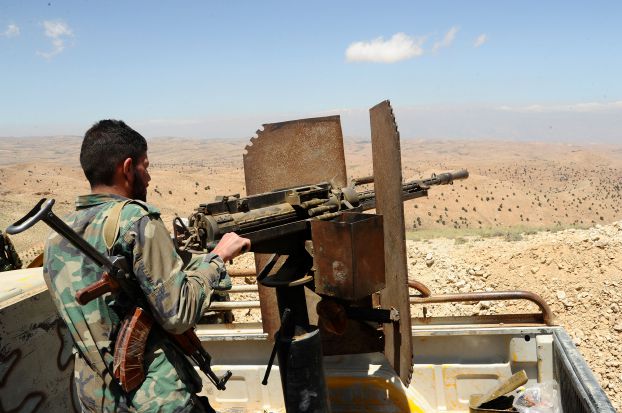 Yesterday witnessed a major collapse in the ranks of the Islamic State group in the eastern Aleppo countryside in northern Syria, amid reports that the militants withdrew from dozens of towns and villages southeast of the city of al-Bab.

Syrian regime forces exploited this opportunity and advanced eastward, reaching as far as the areas controlled by the Syrian Democratic Forces, in which Kurds are the dominant force, in the Manbij countryside. This regime’s latest gains against ISIS means the disruption of the route ahead of the movement of the Turkish army and its allies in the Euphrates Shield factions south of al-Bab.

This military advance came at a time when UN Envoy for Syria, Staffan de Mistura, is engaged in ongoing consultations with the parties attending the Geneva talks, amid Russian moves along the negotiating line.

President Vladimir Putin meanwhile announced that Astana talks between the Damascus government and armed rebel groups had paved the way for the political process in Geneva. Moscow also confirmed its sustained communications with Damascus to discuss “all issues, including ideas around establishing safe zones.”

Yesterday, the Russian Deputy Foreign Minister Mikhail Bogdanov outlined the entryways that Russia considers appropriate to push forward the talks, pointing to the “need to form governing structures that include Syrian government representatives and national opposition.” He added that “the regime in Syria should be secular and not Sunni or Alawite or any other regime, chosen through elections and democratic procedures including Syrians inside the country and refugees holding the right to vote for their leaders.”

Regarding the Geneva talks, Bogdanov reaffirmed his country’s position calling for the formation of a united opposition delegation including a Kurdish component, expressing hope for the success of efforts to hold communications between the High Negotiations Committee and the “Moscow platform.” He said that Moscow was “talking daily with Damascus about the issues in this particularity, and sometimes these are confidential in nature, including the establishment of safe zones.”

Deputy Foreign Minister Gennady Gatilov, who arrived yesterday in Geneva, announced that he intended to hold meetings with de Mistura to discuss the issue of the talks. The head of the High Negotiations Committee, the opposition's delegation to Genva, Nasr al-Hariri said that the opposition on Tuesday would hold a meeting with the Russian delegation in Geneva, stating that “Moscow’s opening toward the rebel groups is a positive sign,” according to the Russia Today channel.

Yesterday afternoon, a meeting was held between the opposition delegation, which included a representative from Jaish al-Islam, Mohamed Alloush, and de Mistura, who a few days ago had handed the Syrian opposition a working paper on procedural issues.

In New York, the Security Council prepared to vote on a draft resolution prepared by the United States, Britain and France aiming to prevent the Syrian government from obtaining helicopters. The draft also proposed to establish a sanctions committee on Syria for the first time in the Security Council and to include on the sanctions list 11 high-level Syrian military officers and security officials and institutions involved in manufacturing chemicals in the Syrian armed forces. The sanctions are to cover travel bans and freezing of assets.

On the ground, Syrian government forces succeeded yesterday in forcing their way through the eastern Aleppo countryside and reaching the areas under the control of the Syrian Democratic Forces, thereby cutting off the road ahead of the advance of Turkish forces and Euphrates Shield groups south of the city of al-Bab.

In Beirut, the head of the US Central Command, General Joseph Votel, said that plans to establish safe zones in Syria and discussions around it were ongoing. After meeting with commander of the Lebanese army Jean Kahwaji, General Votel said, in a press conference held at the headquarters of the Lebanese army, that safe zones in Syria could be a "viable concept," but only after ground troops and resources are set in place.