Assad’s political and media advisor highlighted the importance of reuniting Arab armies in the fight against terrorism and Zionism, in a bid to foil American and Israeli plots to divide Arab states 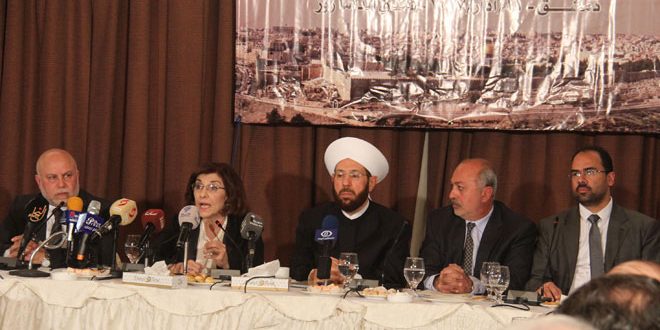 In a press conference on Saturday after a meeting of the board of trustees of Al-Quds International Foundation, which was held in the Dama Rose Hotel in Damascus, Shaaban said that defending Al-Quds (Jerusalem) means defending all Arab cities, because the Israeli enemy has been focusing on the strategy of creating divisions among Arabs.

She pointed out that the late Syrian President Hafez al-Assad’s vision focused on rallying Arab forces in order to undermine the American and Israeli objective of fragmenting Arab positions, adding that the Israeli enemy never loses sight of its main goal of expanding the occupation.

Shaaban said that the current phase is critical and decisive, and that “the infernal Arab Spring” was created to fragment Arab resources and energy and destroy Arab armies.

For his part, the Grand Mufti of Syria Ahmad Badreddin Hassoun said that “this year will be pivotal for the Arab, Islamic, and Christian reality,” calling for Islamic states to adopt a discourse by that moves away from sedition.‫

The grand mufti noted that, unlike certain other Arab countries, Syria has been paying dearly for its support of the Palestinian people, adding that some Arab countries that do not share borders with occupied Palestine have received over $23 billion in weapons this year.