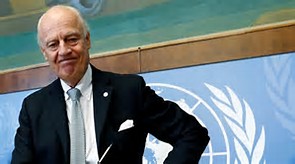 Damascus, without providing a reason, refused to receive the U.N. special envoy to Syria, Staffan de Mistura, who had planned to visit Syria before holding the fifth round of Geneva talks next week, Sputnik news agency reported from a quoted source.

Russian Deputy Foreign Minister Mikhail Bogdanov announced on Monday that the U.N. envoy would visit Moscow over the coming two days and that the trip would precede the Geneva talks scheduled for March 23.

De Mistura on Saturday met with representatives from the opposition High Negotiations Committee in Riyadh and discussed the challenges to the fifth round of Geneva peace talks, as well as the opposition representation and the ways to address the political process.

The fourth round of U.N.-led Syrian peace talks aimed at ending the war were adjourned on March 4 in Geneva. At the end of that round, de Mistura presented the government and opposition delegations with an unofficial paper including 12 items that outlined his vision for the settlement of the conflict and Syria’s future.