After last week’s high-casualty attack on the Justice Palace in Damascus, the head of the Syrian Bar Association defends emergency measures, which involve security checks of lawyers entering courts in Syria 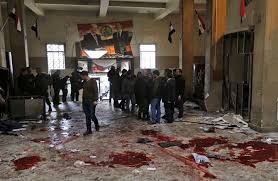 The head of the Syrian Bar Association, Nizar Ali al-Skeif, announced that the organization would file lawsuits against the perpetrators of last week’s terrorist attack in the Justice Palace in Damascus, which killed more than 30 civilians and lawyers.

Talking to Al-Watan, Skeif said that a number of Arab law associations had strongly condemned the attacks.

Concerning a recent decision by the association to conduct security checks at the entrance of the Justice Palace, Skeif said exceptional circumstances called for such measures, adding that codes of etiquette would observed during the screening process.

Skeif also stated that the association had issued a circular to this effect and had communicated the matter to the Justice Minister, and he hoped that attorneys would respect the necessary regulations with patience.

Drawing attention to the issue of lawyers’ harassment of judges on social media, the chief of the Bar Association said that threatening or abusing the judicial authorities was considered an internet crime and punishable by law. He said that the association was considering filing a disciplinary suit against any lawyer guilty of such conduct against judges on social media pages.

Skeif added that lawyers should follow the institutional procedures and seek the Bar Association’s aid in addressing their complaints, rather than using abusive language against judges on Facebook and other social media.