Damascene Kurds celebrate their holiday in the capital with the festivities well attended by Syrian officials, including Jaafari, who made remarks on the occasion 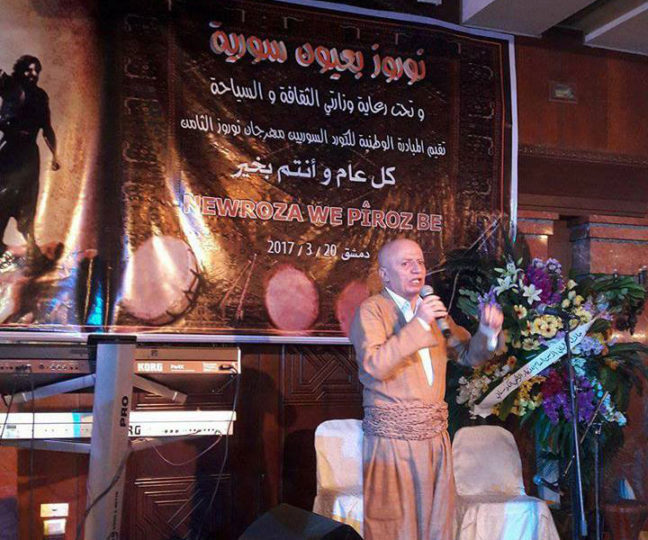 The Syrian capital Damascus on Monday hosted Newroz celebrations in the Sheraton Hotel and the Opera House, which were attended by a large number of regime officials, most notably the Syrian Envoy to the United Nations Bashar al-Jaafari, who lit the Newroz torch for the Kurdish-organized festivities.

At yesterday’s celebrations in Damascus, which were sponsored by Syria's Culture and Tourism Ministry, a member of parliament, Omar Awsi, welcomed the audience and offered congratulations to the president of Iraqi Kurdistan, Masoud Barzani, the leader of the Kurdistan Workers’ Party, Abdullah Ocalan, Jalal Talabani, the former Iraqi president, and Bashar al-Assad, president of the Syrian regime.

The activist Omar al-Dimashqi believed that “the regime was trying to flatter the Kurds by allowing them to celebrate their holiday in the Syrian capital Damascus because it does not want to open another front against the Kurds, who it had long subjected to policies of ethnic discrimination.”

In remarks to ARA news, he also stated: “The regime is dealing with the Kurdish issue in Syria through a narrow security perspective. It believes that it will turn its attention toward the Kurds after eliminating the opposition. However, that will not happen because the Kurds have become a difficult number in the Syrian equation.”

The regime has rejected the proposed Kurdish idea of federalism in Syria, with Jaafari previously stating: “Those who are demanding federalism need to take a Panadol.”