Gen. Ali Abdullah Ayoub says Iran, Russia and Hezbollah are the only forces who can foil the conspiracy against Syria, government outlet reports 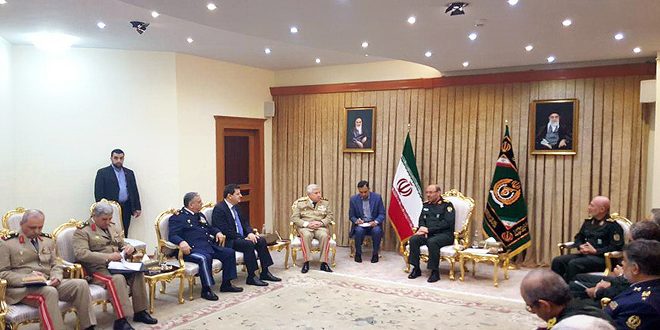 Syrian Chief of Staff Ali Abdullah Ayoub on Tuesday held a session of talks with Iranian Defense Minister Hossein Dehqan to review joint efforts to combat terrorism and prospects for cooperation to tackle the rapid developments facing Syria and the region.

During the talks, Ayoub hailed Iran’s firm stance in support of the Syrian people and army, as well as the country's role in combating terrorism and preventing its spread through the region and the world.

He reiterated that the army will continue its war against terrorists until all Syrian territories are liberated, affirming that “the only way to foil this conspiracy is enhancing the alliance between the forces of the resistance front [Iran and Lebanon’s Hezbollah] and Russia.”

For his part, Dehqan stressed that the Syrian and Iranian peoples are in “the same trench in the face of terrorism.” He also condemned the U.S. aggression against Shayrat air base, affirming that such “terrorism is a threat to the region and the world.”