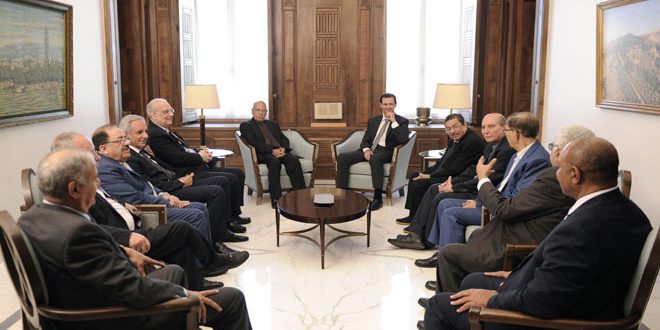 President Bashar al-Assad has warned of the challenges facing the Arab world, stressing the importance of developing an inclusive Arab identity.

Assad’s comments came during a meeting with visiting Arab figures who have taken part in the Arab National Congress and the International Arab Forum on Justice for Palestine, where he touched upon the terrorist war waged against Syria and the problems currently facing the Arab world, including those of weakness, fragmentation and the spread of terrorism and extremism.

In his comments on the Arab situation, the president said the challenges facing the Arab world now necessitate work to develop awareness of Arabism as an identity and an all-inclusive cultural frame and not just as an ideology, affirming the need to commit to pan-Arab thinking and boost sentiment in the face of the projects of fragmentation which are plotted against the region.

For their part, the visiting delegation stressed the need to stand by Syria in its fight, claiming that supporting Syria means supporting the Palestinian cause and the entire Arab nation, since Syria is the gate to Arab national security.

They expressed confidence that Syria will achieve victory over terrorism and foil the plots hatched against it, adding that this victory will pave the way for positive strategic changes in the Arab region.