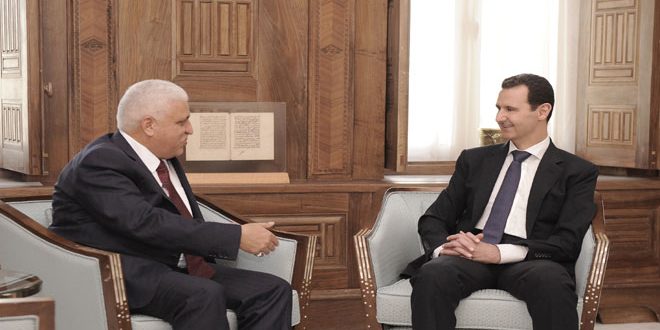 Advances by Syrian and Iraqi forces against terrorists constitute an important step toward restoring security and stability in both countries and resisting plots to fragment the countries of the region, President Bashar al-Assad said.

Assad’s comments came during a meeting with Iraqi national security advisor Faleh al-Fayad on Thursday in which they discussed prospects for direct cooperation between the Syrian and Iraqi armies, including steps for military coordination on the shared border.

Assad said that Syrian and Iraqi forces are facing a common enemy in combating terrorism, as they battle schemes aimed at weakening and dividing the countries of the region.

For his part, Fayad stressed the importance of strengthening cooperation with Syria against terrorist organizations like the Islamic State (ISIS), especially on the border between both countries.