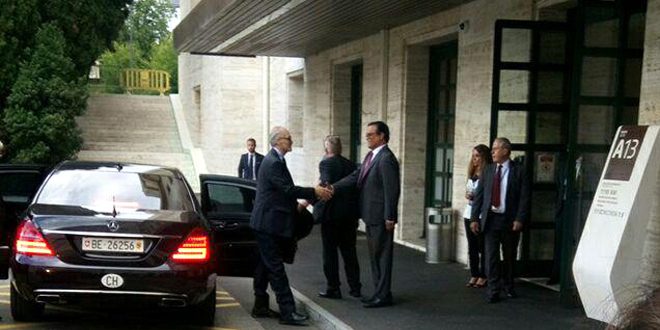 A delegation from the Syrian Arab Republic, headed by Dr. Bashar al-Jaafari, arrived in Geneva on Sunday to participate in the seventh round of the intra-Syrian dialogue, which will kick off in the Swiss city on Monday.

During the sixth round of the Geneva talks, which concluded on May 19, the Syrian government delegation held several sessions of negotiations with United Nations Special Envoy for Syria Staffan de Mistura which focused on experts’ meetings without addressing any of the four baskets that were discussed in previous rounds.

The fifth round of the intra-Syrian dialogue, which wrapped up on March 31, saw the Syrian Arab Republic delegation present throughout eight days several papers to de Mistura, the first of which was on counterterrorism, while another was on general principles for a political solution.

However, the platforms of “the opposition” did not reply to any of the papers. The fourth round of the dialogue ended on March 3, when an agenda of four baskets was agreed on: counterterrorism, governing, the constitution and elections.