Activists believe that the regime is mostly interested in the return of young men in order to enlist them in the army, the opposition-leaning All4Syria writes 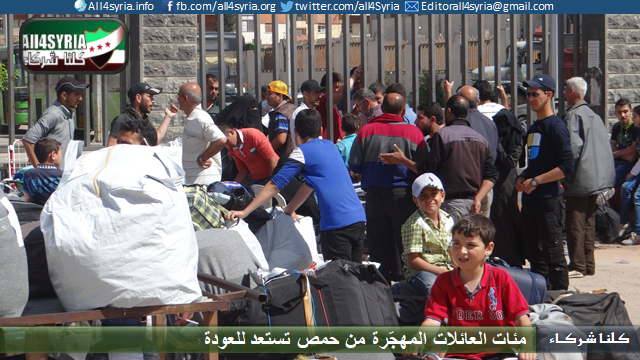 About 200 families from Homs living in the city of Al-Bab and about 250 other families in the Al-Zoughra camp in Jarablus, as well as dozens of others in various areas, are preparing to return to their city after the conclusion of a new deal between a regime committee and families desiring to return. The process should begin on Sunday evening from the Al-Zoughra camp and end on Monday evening as they return to Homs' Al-Waer district.

The regime has placed conditions on those who want to return to Al-Waer, which were proposed by its mediator, known as Adham Rahoub, who communicated with Al-Waer residents in the Euphrates Shield area, which is controlled by Turkish and rebel forces, and asked them to return to their district, provided that they brought their children with them.

Rahoub spoke through voice recordings sent to mediators in the north, through which he asked the displaced people who wanted to return to Homs to form a committee and record their names, and send a list of the names to him and the regime, which has formed a committee headed by Rahoub, in addition to some of the district's residents who did not leave.

Rahoub said that all those who return to Al-Waer would be subject to status regularization and guaranteed that the regime would not subject any person who returns to investigation into where they were or where they went.

Regarding defectors, Rahoub said that soldiers and fighters who defected would have their status regularized and then they would return to service in Homs province. University students would also be regularized and would be allowed at that time to obtain a deferment and return to school.

Activists in Homs noted the regime’s strong desire for young men to return to Al-Waer, which was clearly apparent in Rahoub’s insistence that young men return with the families and not just women and the elderly, in order to exploit them and add them to the ranks of its militias to fight alongside regime forces.

The residents of Al-Waer who were displaced to the Euphrates Shield areas have been enduring difficult humanitarian conditions, which have forced them to return to regime areas after the suffering which began as soon as they were displaced.

They cannot fit into the low-quality camps or secure basics of life such as water, accommodation, food and other necessities. This is in addition to the poor medical situation, the total neglect of education, the inflation in rent and cost of living for those who want to leave the camps and move to other residences, as well as the severe poverty which prevails over these families.