During meeting with Algerian ambassador, deputy foreign minister conflates Syria's campaign with North African fight for independence against the French 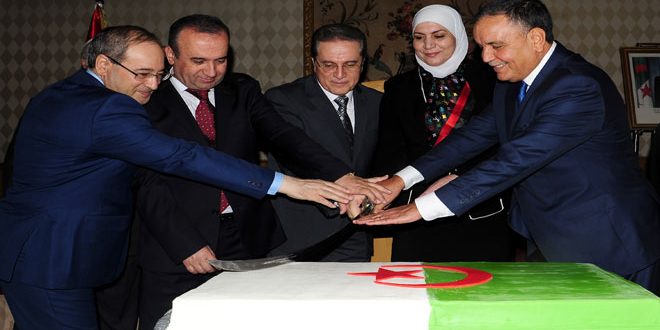 Algeria reiterated its support for Damascus’ fight against terrorism on Wednesday as its ambassador called for Syria’s return to the regional and international stage.

“Algeria rejected freezing Syria’s membership at the Arab League and it has called for activating bilateral cooperation,” Algerian envoy Saleh Bosha said during a meeting in the Syrian capital.

He added that over the past few months, senior delegations from the two countries have exchanged visits to stress Algeria’s solidarity with the Syrian people and to contribute to the reconstruction process in Syria.

For his part, Syrian Deputy Foreign Minister Faysal Mikdad highlighted the brotherly connection between the two countries, describing the Algerian Revolution as a revolution for all Arabs. The fight for Algerian independence saw the expulsion of its French occupiers over 60 years ago.

“Today we are fighting the same occupation, as the ISIS [the Islamic State] and Nusra Front terrorist organizations are another form of colonialism,” Mikdad said, adding that when Arabs unite in the face of their common enemy, they will defeat it and achieve victory.

He also stressed Syria’s support for Iraqi unity despite schemes to divide the country, noting that “Syria and Iraq are indivisible.”

In this context, Mikdad explained that Raqqa and Idleb are inseparable parts of Syria and will be returned to the homeland, vowing that the Syrian Golan will be liberated from Israeli occupation.

In a press statement, Mikdad rejected Ankara’s cross-border incursion, saying: “The Turkish presence on Syria’s territories is illegitimate so it is an occupation, and it is unacceptable as it contradicts with the goals of Geneva Conference.”