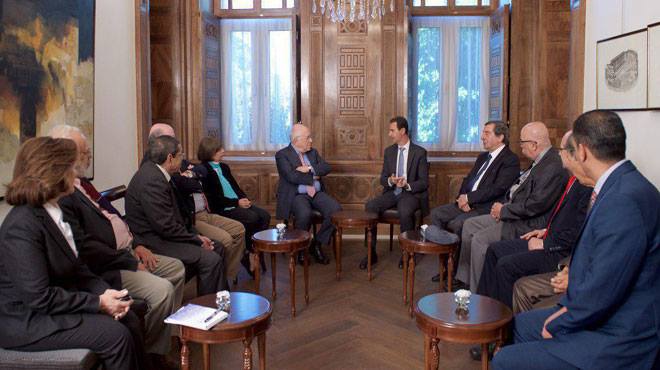 Syria’s President Bashar al-Assad on Monday labeled the events taking place in his country an extension of the intellectual and cultural invasion which has aimed to distort Arab identity for the past century.

Assad’s comments came during a meeting of Arab writers and intellectuals in the Syrian capital Damascus on the occasion of the hundred-year anniversary of the Balfour Declaration.

Talks during the meeting touched on the aspects of the terrorist war against Syria, specifically issues of identity and belonging which pose an existential threat to the entire Arab nation.

The president stressed the necessity of adhering to the true identity of the region, which is based on preserving its culturally harmonious diversity. Loss of this diversity, he said, threatens to create an ideal environment for the spread of extremism, which in turn nurtures terrorism.

Assad underlined the role of intellectual figures in making sure that pan-Arabism extends beyond politics, party theories, and dialogue among select groups. He said it must become a civilized concept and a social practice that bolsters the concepts of belonging and identity among youths and future generations.

For their part, the participants voiced conviction that Arabs will continue to view Syria as the leader of the pan-Arab project, and a model for a real Arab revival that paves the way toward reclaiming rights and building a better tomorrow.