President says Syria and its allies have dealt a 'decisive blow' to terrorists and their backers, during meeting with top Iranian official 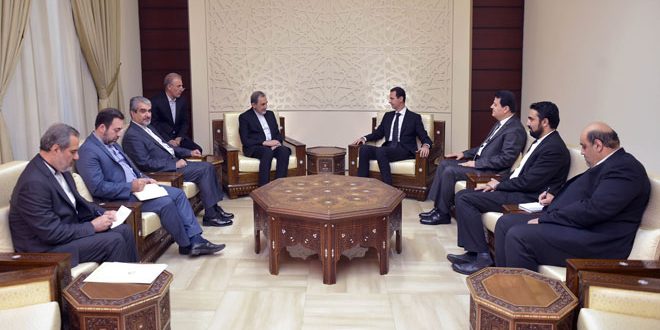 Syria and Iran will continue their work to stabilize the region despite the hostile escalation of some regional and Western countries, President Bashar al-Assad said.

Speaking at a meeting with Ali Akbar Velayati, a top adviser to Iran’s supreme leader, Assad said that attempts by states to disrupt the region cannot be separated from the deterioration of terrorist organizations in Syria and Iraq.

This enmity, he said, “will not dissuade Damascus and Tehran from continuing work to bolster stability in the region and defend the interests of its peoples.”

During the talks, both sides stressed that the battle against terrorist groups will continue until stability and security is restored to the entire Syrian territory.

The Syrian army and its allies are not only fighting terrorism, Assad said, but also fighting against attempts to fund and exploit terrorism to achieve the aim of dismembering and debilitating countries.

He said that the Syrian army’s victories against terrorist groups, from battles in Aleppo to Deir-ez-Zor, constitute a “decisive blow” that foiled the projects of fragmentation and the goals of terrorists and their backers.