Resolution 2254, which the U.N envoy is pushing for, calls for 'ugent' talks between the Assad regime and opposition on a political transition 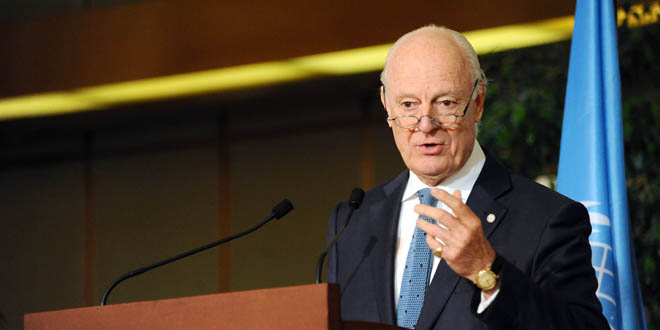 United Nations Special Envoy for Syria Staffan de Mistura has reiterated the need to reach a political solution to the crisis in Syria in accordance with Security Council resolutions.

In statement in the Saudi capital of Riyadh on Wednesday, de Mistura said that the United Nations always relies on the resolutions of the Security Council regarding Syria, particularly Resolution 2254, which sets the course for the Geneva declaration and the achievement of a political settlement.

He said that the framework for the political process will be set within a few days and that the Geneva talks will consist of two sessions, the second of which will be next month. He said that the discussions will focus on the issues of drafting a new constitution and forming a government, as well as kidnapped persons and providing humanitarian aid to all areas.

The U.N. envoy called on the opposition to from a unified team to participate in the Geneva talks without preconditions.