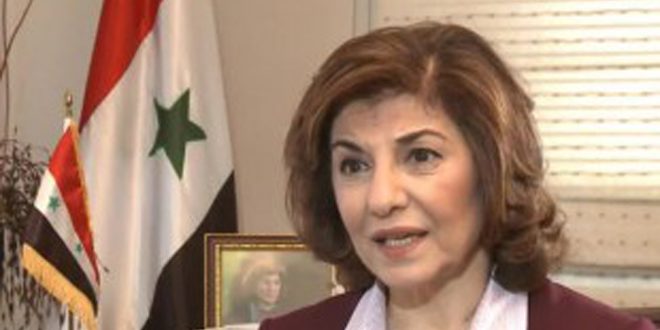 U.S. President Donald Trump’s decision to recognize Jerusalem as the capital of the Israeli occupation entity came after the consent of some reactionary Arab states who claim to support the Palestinian cause, according to presidential advisor Bouthaina Shaaban.

In a telephone call with the Lebanese Al-Mayadeen channel on Wednesday, Shaaban said: “What happened uncovers the depth of the Arab hypocrisy over 50 years and the results of the agreements of humiliation and shame signed with the Israeli occupation entity from the Sinai II Agreement to the Camp David Accords to the Wadi Araba Agreement and the Oslo Agreement, which make us rethink of rereading and rewriting our history again in a transparent and honest way.”

Shaaban added: “This decision [by the Trump administration] is worthless because history is not made by people who are in a state of confusion, but it is made by the loyal ones and those who have a cause, and Trump is not one of them.”

She called for launching an initiative that aims at changing the “Arab Reality” through a real Arab renaissance project that deals with the Arab causes with honesty, loyalty and efficiency.

Shaaban said that the policy of appeasement has proved ineffective and all deliberations regarding Jerusalem have “been just hypocrisy and not keenness on Jerusalem and the Palestinians.”

She asserted that there must be a distinction between the Arabs who are tools of Zionism and the truly honest Arabs who are keen on Jerusalem and Palestine and on themselves.