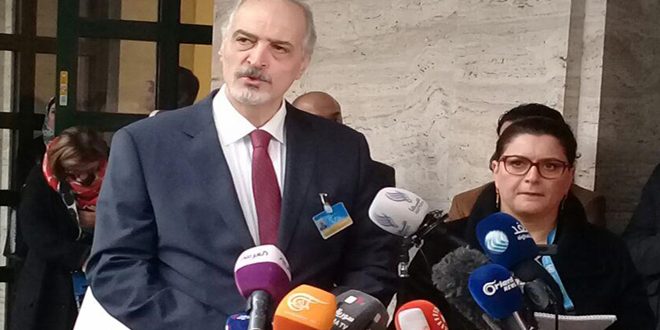 Bashar al-Jaafari, head of the Syrian government delegation to the eighth round of Geneva talks, said that his team has refused to engage in direct dialogue with the opposition because it continues to insists on conducting talks with preconditions.

In a press conference following a meeting with U.N. envoy Staffan de Mistura, Jaafari said that the head of the opposition delegation in Geneva and the armed groups fighting in Syria are one and the same, adding that they have been sending bloody messages to influence the negotiations.

“At the beginning of our meeting today, we focused with de Mistura on the terrorist acts that took place during the past two days in Syria,” Jaafrai said.

“We held intensive talks during the eighth round in order to produce positive results. In view of our conviction of what is happening on the ground from a terrorist war, we have talked about terrorism in a fundamental way because the fight against terrorism is the basic approach to the rest of the four baskets,” he added, noting that most of the sessions of the current round focused on the need to cancel the other party’s preconditions in order to focus on discussion of the four baskets.

Jaafari said that those who drafted the Riyadh II statement intended to undermine the Geneva process by setting preconditions, adding that “the operators of the other parties, and I mean the Saudi authorities and their Western operators, do not want the Geneva process to succeed.”

“In our talks today, we discussed with de Mistura the attack carried out by the terrorists on Tadamon neighborhood in Damascus and the massacre committed by the U.S.-led coalition in Deir-ez-Zor,” he added.

Jaafari said that anyone who wants to participate in the counterterrorism operation should coordinate with the Syrian government and respect its sovereignty rather than relying on an illegal military presence on Syrian territory.

“We do not put preconditions, but we object to the preconditions,” he said, stressing that the Syrian government does not accept imposing a fait accompli on it by anyone.