Rebels scramble to prevent the expansion of regime control in Idleb after militias seize several villages in the province's southeast, Al-Modon reports 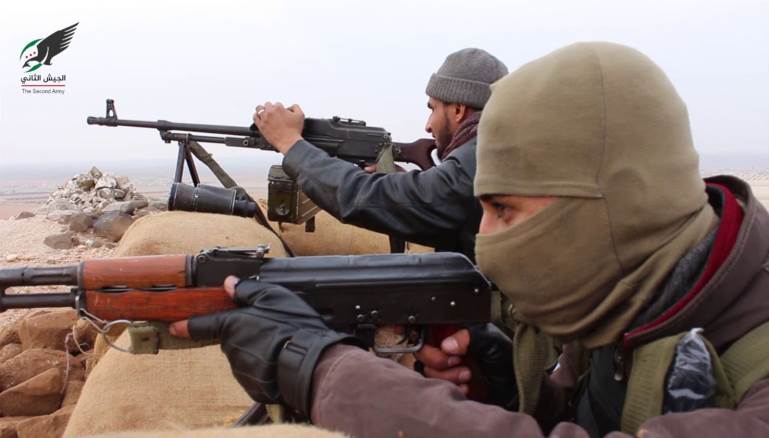 The areas of the southeastern Idleb countryside on both sides of the Hijaz railway have witnessed the swift advance of regime forces and allied militias during the last 48 hours. Continuous shelling and land attacks carried out by the militias have caused a swift collapse in the defenses of the opposition and Hay’at Tahrir al-Sham (HTS) forces in the area. As a result, the militias have been able to seize a large number of villages and farms northeast of Abu Dali in an axis heading toward Sinjar-Abu Dahour.

The targeted areas were subjected to ground attacks by the militias on Tuesday and Wednesday with heavy air raids with vacuum and cluster bombs. Warplanes carried out more than 100 air raids which struck most of the villages in an axis from northeastern Abu Dali toward Sinjar, while helicopters dropped barrel bombs on the same villages and farms.

It is expected that the regime will intensify its ground attacks in the next few days. The militias’ line of advance will presumably continue through remote areas which do not contain major urban centers, providing protection for opposition and HTS fighters who mostly come from northern and western Idleb and the Aleppo countryside, and in a lower ratio from the areas currently under attack. These areas share the least solidarity with the opposition compared with others and produce fewer fighters who are participating in the rebel ranks.

The spokesperson for the Free Syrian Army-affiliated Second Army (Jaish al-Thani), Nasser Akal, told Al-Modon that the regime militias had focused their war efforts during the last two days on an axis of no more than 10 kilometers with the aim of penetrating the southeastern Idleb countryside up to the Abu Dahour air base.

Akal said that the rebel groups had begun to take active preparatory measures to prevent the swift expansion of the regime militias in the southeastern countryside and have begun work to put up fortifications. A reduced operations room has been established in the most active fronts in recent days bringing together the Second Army, the Free Idleb Army, the Al-Nasser Army and Faylaq al-Sham (Hama branch). The Central Division and Division 23 will also participate by providing heavy cover fire in the event if it is needed.

The militias aim to tactically isolate and encircle their rival’s positions in the southeastern Idleb countryside with the aim of swiftly reaching its most prominent aim — the Abu Dahour military air base. The operation was implemented after Gen. Suhail al-Hassan, known as “the Tiger” took over command of the campaign in the region.

The tactic has long been successful in its implementation by Hassan in previous battles from Aleppo up to its eastern countryside and Raqqa and Deir-ez-Zor in the Syrian desert. Hassan’s strategy depends primarily on devastating cover fire on the rival’s positions and pursuing a scorched-earth policy on the axis of advance, while mounting pressure with heavy fire on the isolated areas in an effort to push the rival to withdraw.

The Assad regime militias have bolstered their barracks and advanced in southern positions with heavy artillery, rocket launchers, and fighters from the Al-Baqar Brigade, the Baath Brigades, and the Palestinian Al-Quds Brigade.

Meeting at the Abu Dahour air base will isolate a broad area controlled by rebel groups and HTS east of the Hijaz railway, an area which may be equal in size to that controlled by the Euphrates Shield in the northern and northeastern Aleppo countrysides.

Meanwhile, armed opposition groups have fragmented and have not yet reached consensus in the field. The rivalry among the major factions included HTS and will certainly ease the task for the regime militias and relieve it of a potentially large confrontation, possibly speeding up the achievement of its aim of reaching the air base and taking full control of the region east of the railway.