Hundreds of young men have recently finished training to serve in the Al-Jazira Storm campaign against ISIS, Zaman al-Wasl reports 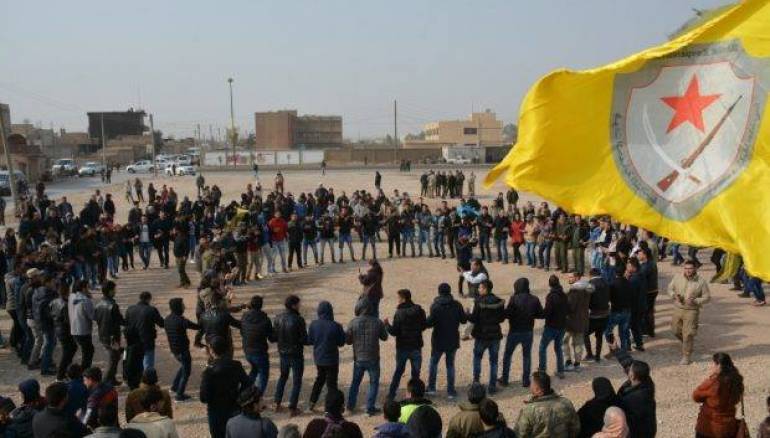 The powerful Kurdish Democratic Union Party (PYD) has forcibly recruited about 1,000 young men into its militia from the provinces of Hassakeh and Deir-ez-Zor, most of whom are teachers in the Self-Administration in northern Syria.

According to Mohanad al-Yousef, an activist in the area, the PYD’s education commission notified a percentage of teachers working in its schools that they must join "mandatory" recruitment camps, referred to by Kurdish officials as "self-defense camps."

“All the teachers in the PYD schools had postponement documents based on a memorandum from the education authority, but they canceled the postponements for hundreds of teachers,” said Yousef.

The activist pointed out that the young men, including 200 people from the areas of Deir-ez-Zor, Al-Shaddadah and Al-Hawl, were transferred to the recruitment camps. The most prominent of these training camps are based in Tal Baidar, Kabka and Tal Adas.

The PYD’s defense commission said however that 850 men from Hassakeh, Qamishli, Al-Qahtaniyah, Darbasiya, Al-Malikiyah and Tal Hamis had voluntarily joined training at the camps. The commission confirmed that the majority of these men are teachers employed in Self-Administration-run schools.

Around 600 men from Deir-ez-Zor who participated in a special preparation session in Kabka graduated from their training last Friday. These men were trained to fight against the Islamic State (ISIS) group in the Al-Jazira Storm campaign which has been ongoing since last September.