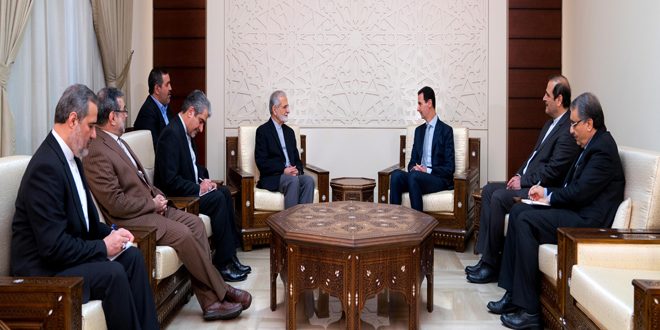 President Bashar al-Assad on Sunday said that victory over terrorism in Syria and Iraq, along with Iran’s resilience in the nuclear issue, has foiled the plot that sought to fragment the region’s states, violate their sovereignty and seize control of their independent decision-making.

Assad’s comments came during a meeting with the head of Iran’s Strategic Council on Foreign Relations, Kamal Kharazi.

Assad added that the flagrant Turkish aggression on the Syrian city of Afrin cannot be isolated from Ankara’s policy of supporting terrorism since the first day of the Syrian crisis.

For his part, Kharazi congratulated Assad and the Syrian people on their victories against terrorists, including the recent recapture of the Abu al-Duhur air base, voicing confidence that more achievements will follow both on the political and military levels.

Kharazi stressed the importance of close cooperation between Syria and Iran in confronting foreign conspiracies, saying that the Syrian-Iranian harmony has played a positive role in this regard.

The Iranian official also met with Foreign Minister Walid al-Muallem, with the two sides expressing agreement over the need to increase bilateral relations and coordination in order to bolster the achievements made in the war on terrorism and to support the political settlement of the crisis in Syria.