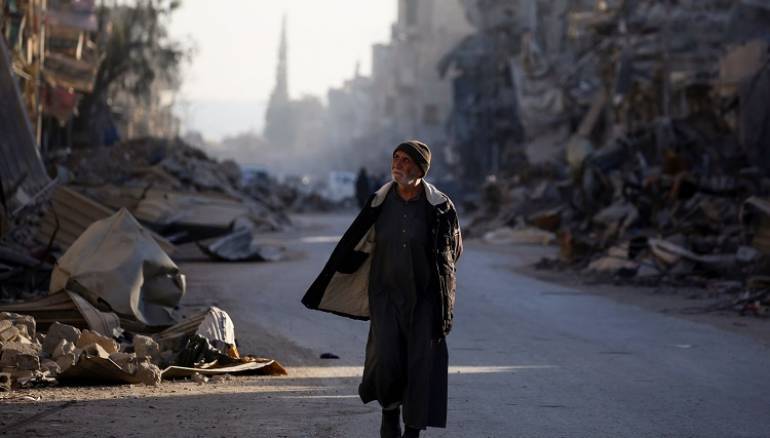 Social media observers may notice the deepening gap between segments of Syrian society since 2011. This great rift was not confined to the limits of the virtual world only, even extending to conflicts between members of the same household.

“The war itself is one of the most important factors in the rooting of the Syrian-Syrian divide,” said journalist Mohamad al-Awaid, “especially the media propaganda that has always been talking about a civil war in Syria and feeding it to one side and not another, forgetting and ignoring the basic and fundamental value of the revolution of Syrians demanding freedom, civil state and rights for all."

Awaid believes that the cessation of war and the establishment of peace will be the beginning of the return of the Syrian fabric. He said that "the basis of promoting any civil peace is the accountability of those who violated it and blew it up. The accountability of course extends to those who have killed, destroyed and encouraged the crisis whether local, regional or international [actors]. These rights do not die, and in stabilizing these rights civil peace can be realized."

Journalist Abbas al-Diri explained that, "the fall of the first victim in the revolution should have united the entire people against the perpetrator of this crime, but personal considerations and goals have made a section of the people line up alongside the murderer [President Bashar al-Assad] and support him with everything."

Diri said: "The division of the Syrian people stems from the preference of a social group to influence, power and authority over freedom, dignity and humanity. Today, Syria is divided into people fighting for freedom and people fighting to keep the president, who ruled with his father with blood and iron and fire.”

He added that Syrians have customs and traditions that they can boast to all humanity. They are the people of coexistence, tolerance and good values, and their lives are a beautiful mosaic, adding that the glamour will be restored after the fall of those who destroyed this and served to spread sectarian and regional strife among citizens.

Forgiveness when one can

One of the ancient Arab values is that of forgiveness, if this forgiveness is a way to stop bloodshed. In the case of Syria, the state of cracking and fragmentation was caused due to celebrating bloodshed in some cases, and silence over crimes in others.

Psychological expert Mohamad al-Jahmani does not deny the negative repercussions resulting from this matter on society and its future. He said he expected it to evolve into bloody clashes and conflicts if wise people did not rush to address the problem. He stressed the ability of the Syrian society to transcend all wounds provided courts hold the criminals accountable and bring justice to the oppressed.

Jahmani warned of "repeating the Lebanese experience.” Courts are the healing balm and the ideal solution that satisfies everyone, where people can come together. He stressed the need to spread the principle of coexistence and a single society from now on. Our society is cohesive, loving, and tolerant and it will rise above what happened.

Dr. Ahmad al-Hammadi, a researcher in conflict and political science, claimed that "the full responsibility is that of the Assad regime, which worked with all its security and exploitative machinations to play on the sectarian, regional, ethnic and even regional and tribal factors, and to provoke these doctrinal tendencies of the popular incubator of the revolution.”

“This led to a deep rift in the structure of Syrian society, after the Assad regime portrayed itself as the protector of minorities, but his behavior is exposed to the Syrian people, the majority of the community looks forward to a new Syria in which everyone lives in freedom and peace,” he said.

Hammadi expressed his optimism to overcome this problem, saying that "this deep wound that has befallen the society will be removed and will be cured when its causes disappear and the criminal tyrant regime is gone.”

He says the way to achieve the unity of the Syrian people is by establishing a democratic and modern state where citizens can achieve their aspirations and objectives under the rule of law. This, he explains, shall be in accordance with a social contract agreed upon by all and shared through their representatives, without reducing the right of any component or marginalization of its existence, and thus the possibility of the return of Syrian healthy society.