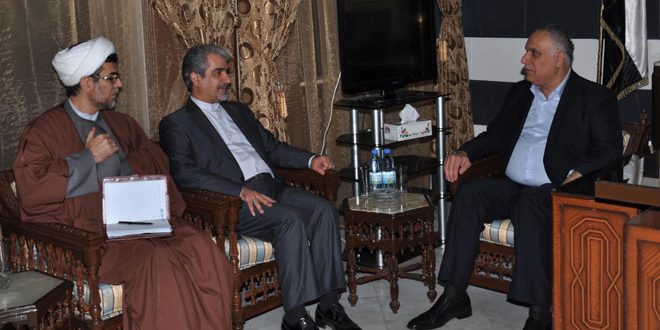 Iranian Ambassador to Damascus Javad Torkabadi on Wednesday stressed that the coming period will see Syria and Iran work hand in hand to rebuild the country in accordance with a united vision.

Torkabadi’s comments came during a meeting with Governor of Homs Talal Barazi, at which the two sides discussed methods of boosting cooperation between the two countries.

Barazi briefed the Iranian diplomat on the situation in Homs following the destruction caused by terrorism to the province’s infrastructure and property. He also noted the renovation of the city's old markets and the current studies on creating adequate circumstances for reconstruction.

Torkabadi said his visit to Homs aimed at boosting cooperation and bilateral relations between Syria and Iran in all domains, pointing out that he clearly noticed signs of normal life in the province and sensed how deeply the people of Homs love their city.

He also hailed the great victories achieved by the Syrian army and its allies against terrorism which have restored security and stability in most areas of the country.