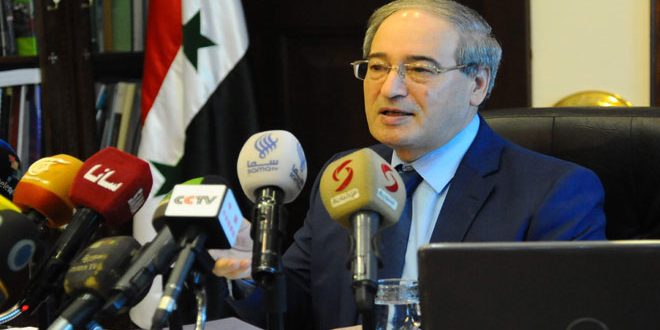 Deputy Foreign Minister Fayssal Mikdad said on Wednesday that Washington is spreading misleading news about the use of chemical weapons by Syrian forces because it is uneasy about the achievements of the Syrian army.

“There is still no evidence of the use of chemical weapons by Syria and all the accusations are based on false allegations made by the so-called Syrian Civil Defense organization (White Helmets), which actually appeared through publishing news and videos proved to be false,” Mikdad said in a statement.

The diplomat called on the United Nations to investigate America’s actions and practices, “which threaten the territorial integrity, sovereignty and political independence of Syria and aim at the liquidation of the Syrian people, contradicting the objectives and principles of the U.N.”

The U.S. has accused Syrian forces of using chemical weapons in the Eastern Ghouta, Idleb and other areas.

In the period between Jan. 15-17, 2018, terrorists in Idleb used chemical weapons twice against the advancing Syrian forces, Mikdad said. He added that Syrian troops were “attacked by chlorine gas near the town of Hawin to the south of Idleb and the town of Sinjar.”

The official accused the Organization for the Prohibition of Chemical Weapons of being ineffective at carrying out investigations inside Syria, claiming that its evidence has been limited to research published online and interviews with witnesses in other countries. He said that investigations must be credible and serious and should be conducted in the location where the alleged incident occurred.

Mikdad also responded to comments by U.S. Secretary of State Rex Tillerson about American forces remaining illegally in Syria under the pretext of defeating terrorists, saying: “We tell Tillerson and others that we are able to get rid of terrorists when the West stops supporting them and that those who killed the terrorists in Syria are the Syrian army and its allies.”