Syria's representative to the U.N. bemoans the rejection of Russian amendments to the resolution, according to SANA 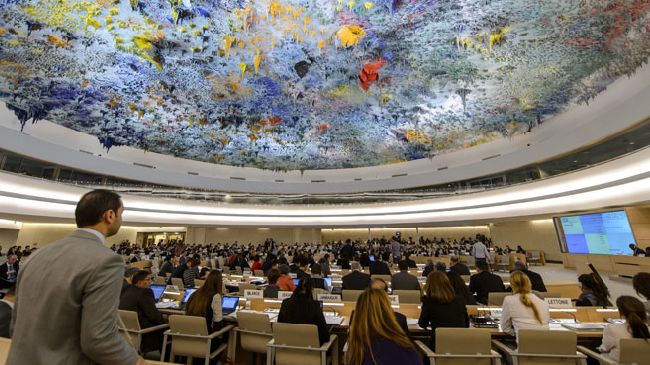 Syria’s Permanent Representative at the United Nations in Geneva Hussam Eddin Ala said that the resolution adopted by the U.N. Human Rights Council (UNHRC), which was submitted under the pretext of protecting human rights in Syria, was clearly politicized and selective, as proven by the rejection of the Russian amendments that relied on facts.

In a speech at the UNHRC on Monday, Ala said: “Once again, some states are trying, via this council, to pass resolutions that have nothing to do with human rights. Regrettably, we witnessed today once again the adoption of a resolution submitted under the pretext of protecting human rights in Syria, buts its politicized and selective goal was very clear.”

He pointed out that rejecting the Russian amendments, which dealt with the facts in terms of condemning terrorism and the arbitrary targeting of residential neighborhoods in Damascus from Eastern Ghouta, along with refusing to demand that armed groups in Ghouta refrain from attacking the humanitarian corridors set up to evacuate civilians and deliver humanitarian aid, are clear evidence of the politicization and manipulation perpetrated by certain states in the UNHRC, adding that the justifications given by these states for rejecting the Russian amendments were flimsy.

Ala noted that he affirmed in his statement on Friday that the Syrian government approved delivering an aid convoy to the Ghouta, and preparations are underway to send this convoy, which consists of 46 trucks and a mobile clinic, into the enclave, but the resolution adopted by the UNHRC sends a negative message to armed groups that will prompt them to obstruct the entry of the convoy.