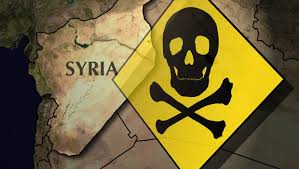 Informed sources on Thursday said that terrorist groups' tales of the use of chemical weapons have appeared again in the Eastern Ghouta, coinciding with Washington and Paris' feverish attempts at the United Nations Security Council to target Syria.

In light of the accelerated collapses in the ranks of terrorists due to the victories of the Syrian army and citizens in the Ghouta raising of the national flag to announce their support of the state, the fabrications and accusations appeared again to defame Syrian citizens in the Ghouta and demand Western interference, the sources said.

On Wednesday, the U.N. Security Council held a closed-door meeting at the request of France and Britain on the situation in Syria. At the end of the meeting a press statement was released calling for the implementation of the UNSC Resolution 2401.

The sources said that in response to this ugly scenario, citizens in Ghouta took to the streets and demonstrated in rejection of terrorists, raising the national flag in many areas.

Terrorists who fabricate such accusations, according to the sources, are not citizens of the Ghouta and aim at using fabricated chemical weapons scenarios to trade with the blood of women and children.