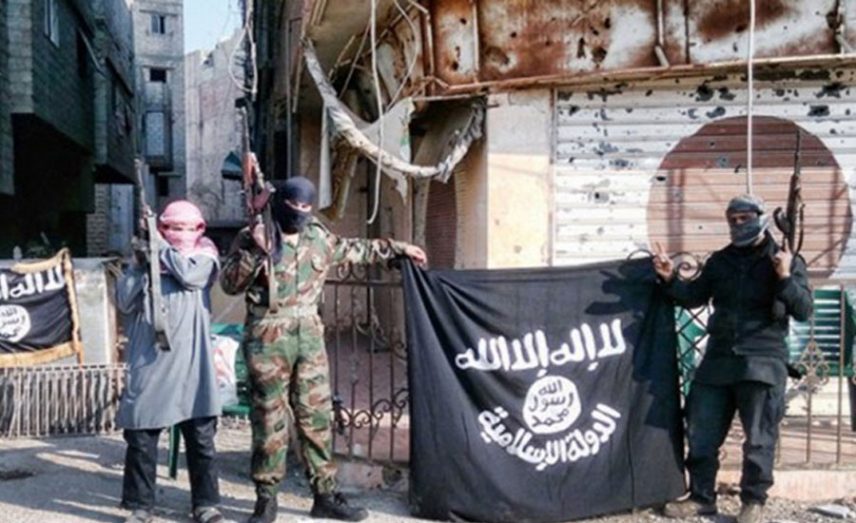 The Islamic State (ISIS) group took surprise control of the Al-Qadam district south of Damascus midway through last week after the regime allowed Hay'at Tahrir al-Sham’s fighters to leave with their families to Idleb city, which raised questions about how the group was able to reorganize its ranks and penetrate areas surrounded by the regime.

ISIS carried out three attacks last Tuesday on regime forces positions in the Al-Qadam district after entering parts from which Hay'at Tahrir al-Sham had departed, leading to the deaths of about 150 members of the regime forces, including prominent officers, according to the group’s news agency.

Pro-regime pages acknowledged the heavy assault, with the “Syrian Arab Army Operations Room” saying that regime "forces entered to take over the areas vacated by the Al-Qadam fighters, and then an Islamic State group surrounded them and the results were disastrous, whereby 110 regime forces were killed, not including wounded and missing.”

In light of the regime’s loss of the Al-Qadam district, the Reconciliations Committee of the Al-Qadam area visited the towns of Al-Kaswa and Al-Maqailbiya in the western Damascus countryside with the aim of forming groups from the district’s displaced residents to fight ISIS in the area, and promised them they could return to the district with their families.

Ambiguous deal between the regime and ISIS

Regime forces made an agreement with ISIS which included handing over 125 bodies of regime fighters through the Syrian Red Crescent, in exchange for releasing a number of prisoners from President Bashar al-Assad’s prisons, amid ambiguity over the deal’s aspects and the mechanism for its signature.

A team of the regime forces entered the district after agreeing with ISIS to withdraw corpses and transfer them to areas under regime control through the Red Crescent, which was confirmed by pro-regime media sources.

The Syrian Observatory for Human Rights said that regime forces released a number of imprisoned women as a first batch in exchange for the organization handing over dozens of killed soldiers who had recently died in the battles in Al-Qadam. It said that the regime would release another batch of women in exchange for handing over a number of pro-regime families held by the organization, to complete the deal between the two sides.

The military analyst Gen. Adeeb Alioui said: “The organization reached the Al-Qadam district under the full supervision of the Assad regime, which has recently tightened the noose on opposition groups who fought with the Islamic State south of Damascus, and so the regime is the reason for giving the organization the legitimacy to remain till today.”

Alioui added that “the recent expansion of the organization will make it difficult to take this area from them, and therefore the regime will resort to calling for Russian and Iranian support, which means new destruction of southern Damascus.”

He added: “Because of 240 fighters from Hay'at Tahrir al-Sham, tens of thousands have been expelled from the Eastern Ghouta, and this is what the regime has planned for southern Damascus after the end of the Ghouta issue.”

The organization controls about 70 percent of the Yarmouk camp area in the southern part of the capital, while it is deployed in the Al-Hajjar al-Iswid district (its main stronghold), the Al-Asali area and many parts of the Al-Qadam district, in addition to its control over a portion of the Al-Tadamon district of Damascus.