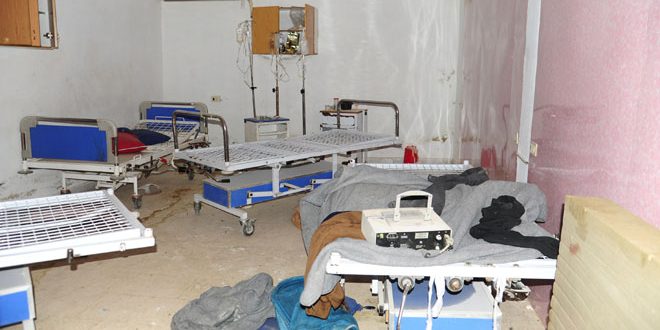 A plant for manufacturing ammunition and field hospitals were discovered by the Syrian Arab Army during its combing operations in Harasta city and villages of the Eastern Ghouta.

Speaking to SANA’s reporter, field commanders said that army units found a field hospital equipped with medical devices and equipment stolen from government hospitals in the town of Hazza, Ayn Tarma and Harasta, in addition to a warehouse full of medicines that were seized by terrorist organizations.

In Saqba town, an army unit found a Faylaq al-Rahman site including advanced communication devices to secure communications between terrorist groups and their operators abroad, in addition to an RC aircraft.

A SANA camera toured a field hospital in Harasta city that includes operating rooms, an ER, medicine warehouses and tunnels connecting the entrances of the hospital to transport the injured terrorists.

During the sweeping operations inside Saqba town, a field commander said that the army found a large plant for manufacturing IEDs and shells in the area between Hazza and Saqba towns.

The two-floor plant is equipped with materials for the manufacture of IEDs, rockets and mortars, noting that these machines cost hundreds of millions to produce.

Later on, an army unit discovered a site of “Al-Mahkama al-Shariaa” (Religious Court) affiliated to Ahrar al-Sham, which held thousands of documents stolen by terrorists from the state’s institutions in Harasta.