After fluctuations seen during the threat of Western military action, the Syrian pound has calmed down, Al-Watan reports 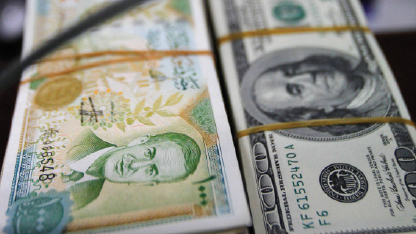 The exchange rate stabilized during the opening of the week’s trade in the parallel “black” market, as the dollar exchange rate with the Syrian pound approached the official rate again, with the average prices in Damascus between 438 and 442 Syria pounds, while there were variations in other markets.

According to sources in the market, trade yesterday witnessed stability amid normal conditions, as the result of a decline in international political fears and a state of security bolstered by the army and armed forces after the tripartite (American-British-French) aggression against Damascus.

The Western escalation before the aggression had stirred fears in the market, which pushed the exchange rate to high levels, exceeding 470 Syrian pounds to the dollar, a rise of about 8 percent.

Market sources told Al-Watan that relatively large contracts were made at these prices, as there was an increase in demand over supply, describing what happened in these conditions as operations across markets where price is based on the size of the deals, the need of the buyer and the profit margins of the vendor, so it was not possible to talk about a specific market price, as occurred after the stabilization.

The sources confirmed there was a good level of exchanges in the market in terms of volumes on the supply and demand side, especially traders, in the expectation of an improvement in the Syrian pound exchange rate to get closer to the official levels.

In the same context, the Damascus Center for Research and Studies (DCRS) in its weekly economic report pointed to a major decline in the Syrian pound exchange rate compared to the dollar in the parallel market as a result of the American threats to carry out a major military strike on Syria, which created a wave of demand for the dollars and a reduction of supply amid a state of fear and confusion in the market.

In addition, speculators exploited this news to make major gains. It reached a maximum of 475 Syrian pounds to the dollar and then returned, and the market closed Thursday at 455 pounds after a reduction in the severity of the country’s hostile statements.

The report expected an improvement to continue in the Syrian pound exchange rate in the coming days after the tripartite aggression passed with minimal damage, considering that the pound is still receiving support from basic economic factors and continuing transfers from abroad, as well as the positive effects of the liberation of the Eastern Ghouta in the markets.

In the official market the Syrian pound stabilized against the dollar with banks and exchange companies, with the Syrian Central Bank continuing to set the pound/dollar price at 436 pounds to the dollar.