Syria's representative to the world body calls on Israel to give up its nuclear weapons, SANA reports 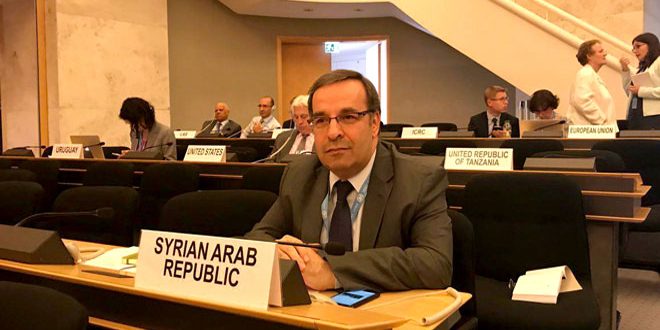 Syrian representative to the United Nations in Geneva, Hussam Eddin Ala, said that Damasucs rejects attempts of some countries to politicize and adopt a policy of double standards regarding nuclear weapons.

Ala, speaking at the second preparatory session of the 2020 Non-Proliferation Treaty (NPT) Review Conference at the U.N. in Geneva, Switzerland, added that Syria was one of the first countries to join the NPT in 1968, affirming Syria still respects its obligations under the provisions of the treaty.

He pointed out that Syria is looking forward to the second preparatory process being able to make real progress toward achieving the objectives of the treaty.

The envoy said that the 1995 decision to establish an area free from weapons of mass destruction and nuclear weapons in the Middle East is still awaiting implementation, without any signs that this is taking place, especially as some of the states party to the treaty continue to adopt positions that depart from compliance with the commitments they have assumed.

He added that all the countries of the region have expressed their readiness to take practical steps toward the establishment of a nuclear weapons-free zone and other weapons of mass destruction in the Middle East, but the Israeli entity continued, with the absolute support of its United States and British allies, in its refusal to accede to the NPT.

Ala said that some countries continue to claim in their statements that Syria has not cooperated substantively with regard to the nature of the site targeted by the Israeli entity in its aggression on a military facility in Deir-ez-Zor, which is contradicting the facts, since the International Atomic Eenergy Agency’s conclusion regarding the site was based on guesswork and lack of material evidence.