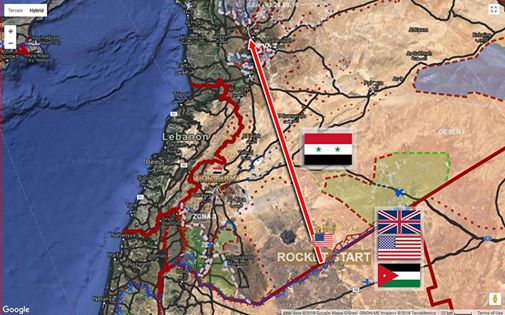 The Tishreen newspaper, a mouthpiece for the Assad regime, quoted an unnamed military source as saying that the missile attack which struck military positions in Syria on Sunday were launched from American and British bases in northern Jordan.

The newspaper added that the attack was carried out with about nine ballistic missiles without noting the damage inflicted.
American military sources denied to CNN that the United States or the international coalition against the Islamic State (ISIS) group bombed military positions on Sunday evening.

The United States, France and Britain carried out military strikes on Assad regime positions two weeks ago as a result of the chemical attack carried out by the regime’s forces against civilians in the Ghouta. The regime accused Israel of bombing the Al-Taifour air base near Homs on April 9.

The regime news agency SANA quoted an unnamed military source as saying that the military positions were struck by missile attacks on Sunday.

The source said: “Some military sites in the Hama and Aleppo countrysides were subjected to a new aggression with hostile missiles at about 10:30 p.m.”

SANA had reported explosions heard in the two areas saying that “the relevant authorities are working to confirm the cause.”

A source in the opposition told Reuters that one of the sites that had been damaged had been a base for the regime forces known as Brigade 47 near the city of Hama, and is widely known as a center to conscript Shia soldiers backed by Iran who are fighting alongside the regime.

A source closely following the situation in Syria said that a number of missile attacks had hit what seemed to be command centers of groups backed by Iran and that dozens had been wounded and killed.

The source, who asked not to be named, said that the attacks had hit weapons storehouses and that other explosions were heard.

While there has been no official Israeli comment on the reports, a newspaper reported explosions resulting from a bombardment carried out by Tel Aviv. Arab media only reported news of the explosions quoting Syrian activists, saying that there had been deaths.