Displaced Syrians are bearing terrible conditions as the wait in limbo, SMART reports 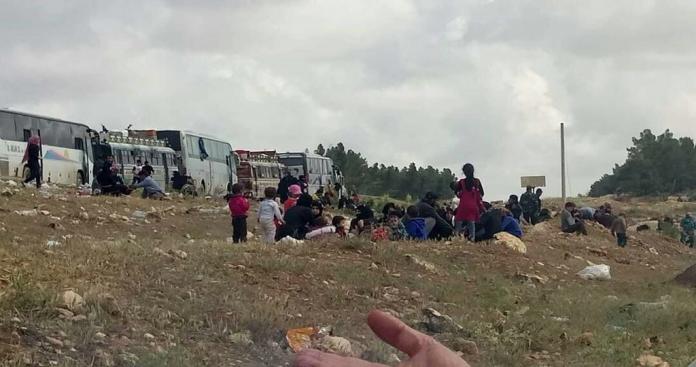 Turkish authorities on Tuesday prevented the entry of the first convoy of displaced from northern Homs to the Euphrates Shield areas after they reached the Abu al-Zanadin crossing near the city of Al-Bab, 38 km east of Aleppo city, in northern Syria.

Local activists told SMART that Free Syrian Army groups supported by Turkey prevented the entry of the convoy which included 3,200 people, most of them women and children suffering from difficult humanitarian conditions because of their lack of obtaining permission from the Turkish authorities.

On Monday, a convoy of displaced people set off after a state of chaos and tension at the point where residents and fighters gathered who refused to settle with the regime.

Before that, clashes broke out between the Sultan Murad brigades and the Saqour al-Jabal brigades in various parts north of Aleppo in new fighting between the FSA factions of northern Syria.

The negotiating committee for northern Homs and southern Hama said that those who wanted to return to their homes after finishing the eviction needed to submit a request to the Turkish government, confirming there was a failure to reach a deal around defectors.

In a related context, Turkish officers promised displaced people from south of the Syrian capital Damascus to transfer them to the Afrin area, 42 km northwest of Aleppo, in northern Syria after preparing shelter centers for them.