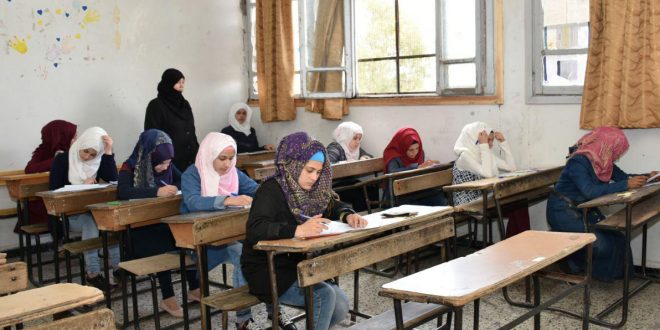 Across the country 281,867 students are heading into examination centers today for basic education exams, an increase of 12,000 students over last year.

Education Minister Hazwan al-Wizz told Al-Watan that the education directorates in the provinces had finished the necessary preparations for this year’s exams, including the preparing the centers, exam and response papers and all that relates to them. He said that 2,215 exam centers for the basic education degree had been opened in addition to 54 centers for religious education, noting that the number students sitting exams for religious education is 3,687.

Wizz revealed that a decision had been taken for an alternative course for students from Ghouta. He said that testing has revealed that students who were captives of terrorist groups in Ghouta were not ready to enter the exams because of long years with a lack of access to schooling. The ministry has begun to implement intensive programs for students to help them enter the exams in August, ensuring that these students are not deprived of their right to an education.

Al-Watan on Thursday observed more than five buses, carrying more than 300 Syrian students coming from Lebanon to participate in the exams. When these students were asked about how they entered, some responded that they have lived with their families in the Sidon area of Lebanon for more than six years and had been instructed by relevant agencies, who helped them enter Syria for 15 days to participate in the exams and had registered them for free study and after the exams they would return to Lebanon.