Yarmouk camp had been under siege since 2011, and after being captured by regime forces on Monday, soldier began looting homes reports Zaman Al Wasl 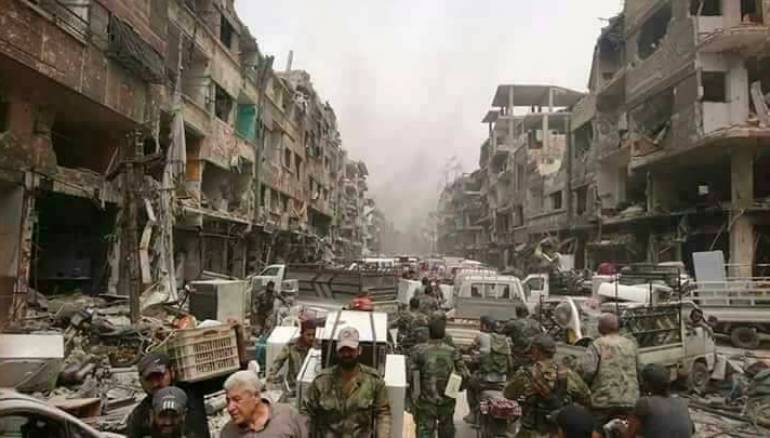 Syrian regime forces, who on Monday seized the southern neighborhoods of Damascus from ISIS, have been looting properties, activists say.

Footage circulated by activists showed civilian houses that had been raided and looted by the regime army and allied militias.

The looting followed celebrations by the regime’s military and police forces in the ruined Yarmouk Palestinian camp and the al-Hajar al-Aswad district.

Bashar al-Assad's military announced it had recaptured al-Hajar al-Aswad from Daesh militants on Monday, bringing the entire capital and its suburbs under full government control for the first time since 2011.

Meanwhile, the U.N. said it was almost impossible to imagine people returning to Yarmouk.

Yarmouk has been so heavily battered by fighting that it was hard to picture daily life restarting there, the United Nations Relief and Works Agency for Palestine Refugees (UNRWA) said Tuesday.

"Yarmouk was once the thriving home of 160,000 Palestinians. Today it lies in ruins, with hardly a house untouched by the conflict," spokesman Chris Gunness said.

Fighting over the years had whittled down Yarmouk's population to just hundreds by the time regime's army began its assault last month.

Gunness said between 100 to 200 civilians were estimated to still be in Yarmouk, including people too old or sick to flee.

Yarmouk was, for decades, a bustling district where both Palestinians and Syrians lived. It was placed under a crippling siege a year after the uprising began in 2011.