Russian Deputy Foreign Minister Mikhail Bogdanov has reinforced the idea of Syrian sovereignty, saying that it can choose who it wants help from reports SANA 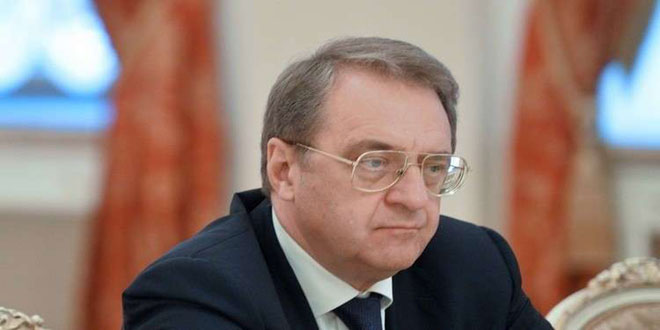 Russian Deputy Foreign Minister Mikhail Bogdanov has said that Syria is a sovereign state that chooses the party that helps it in the war on terrorism.

In a press statement on the sidelines of St. Petersburg International Economic Forum 2018 (SPIEF), Bogdanov said that Syria is a sovereign country with a legitimate leadership which chooses the party that helps it in the war on terror and the kind of assistance it wants.

He added that many successes have been achieved in the fight against terrorism, whether in Damascus, Aleppo or elsewhere, indicating that the security situation in Syria has improved markedly but the task of fighting terrorism in the country has not yet been fully realized.

He stressed that the most important issue is that all forces join ranks for the total elimination of the terrorist threat.

Bogdanov said that the date of the high-level meeting on Syria in Sochi has not yet been finalized, but that the process is ongoing and the agreement on the most appropriate date will be coming soon.

According to Bogdanov, the Syrian government may send within 48 hours the names of its candidates for the committee to discuss the constitution which resulted from the Syrian National Dialogue Congress in Sochi.